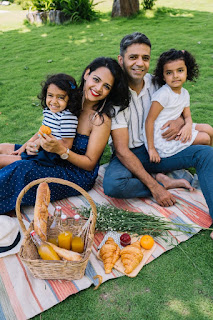 Photo by Anna Tarazevich
From pexels.com

Edgar Guest (20 August 1881 – 5 August 1959) was one of the most popular poets during his lifetime. He wrote for the common people, not for academics. Home and family were among the subjects that inspired his work. His style may not be honored as much today, but some of his poems are still read. Here is a poem he wrote on the theme of family:

The stick-together families are happier by far
Than the brothers and the sisters who take separate highways are.
The gladdest people living are the wholesome folks who make
A circle at the fireside that no power but death can break.
And the finest of conventions ever held beneath the sun
Are the little family gatherings when the busy day is done.

There are rich folk, there are poor folk, who imagine they are wise,
And they're very quick to shatter all the little family ties.
Each goes searching after pleasure in his own selected way,
Each with strangers likes to wander, and with strangers likes to play.
But it's bitterness they harvest, and it's empty joy they find,
For the children that are wisest are the stick-together kind.

There are some who seem to fancy that for gladness they must roam,
That for smiles that are the brightest they must wander far from home.
That the strange friend is the true friend, and they travel far astray;
they waste their lives in striving for a joy that's far away.
But the gladdest sort of people, when the busy day is done,
Are the brothers and the sisters who together share their fun.

It's the stick-together family that wins the joys of earth,
That hears the sweetest music and that finds the finest mirth.
It's the old home roof that shelters all the charm that life can give;
There you find the gladdest play-ground, there the happiest spot to live.
And, o weary, wandering brother, if contentment you would win,
Come you back unto the fireside and be comrade with your kin.

This poem is in the public domain.

Marilyn Taylor often writes with a twinkle in her eye. The poem below is a more contemporary take on family:

The city apartment is leaky and cold,
The landlord lascivious, greedy and old—
The mattress is lumpy, the oven’s encrusted,
The freezer, the fan, and the toilet have rusted.

The company caved, the boss went broke,
The job and the love affair, all up in smoke.
The anguish of loneliness comes as a shock—
O heart in the doldrums, O heart in hock.

And so they return with their piles of possessions,
Their terrified cats and their mournful expressions,
Reclaiming the bedrooms they had in their teens,
Clean towels, warm comforter, glass figurines.

The following poem, by Caroline Johnson, reminds us that family relationships change over time. It is addressed to the narrator’s aging father.

Long ago you told me your father
tried to hypnotize all four of his sons.
You didn’t remember much, except
you wanted to be smarter, and afterwards
you immediately began reading the dictionary
page by page, while your brothers laughed.

When it was trendy in the 1970s, you
sat us down one by one. I counted
slowly to one hundred. You told me
to close my eyes, but I remember
peeking at a blinking Christmas light.
Your voice was smooth, intoxicating,
like the vodka tonic on the side table.
We sat together for 10 or 15 minutes,
you feeling more confident despite
each sip, me drunk on the attention.

Now I spend quiet afternoons with you
in your wheelchair. The voices of Dan Rather
and Wolf Blitzer hypnotize us. Now and then
you close your eyes and I speak to you
in hushed tones, coffee in hand. You worry
about your finances as you grip the remote,
the panic of losing control aching into
each hour, each minute, each second.

Previously published in The Caregiver (Holy Cow! Press, 2018). Used by permission of the author.

ALSO, please follow the guidelines carefully. For example, if your name is at the top of the page or under the title instead of at the bottom, I might accidentally miss it when preparing to send the poems to the judge, and your poem could be disqualified as a result. If it isn’t under your poem, I might mistype it. Also, if you don’t follow the directions in how to write the subject line of your email, your poem might be missed.

The challenge for this month is a poem about family. You might want to save your poem about your ancestors and/or family tree for later this year.

Title your poem unless it is in a form that discourages titles. Single-space. Note that the blog format does not accommodate long lines; if they are used, they have to be broken in two, with the second part indented (as in the poem “Lilith,” one of the May 2018 winners), or the post has to use small print. Put your name and bio under your poem. Please keep the poem on the left margin (standard 1” margin). Do not put any part of your submission on a colored background. Do not use a fancy font and do not use a header or footer.

You may submit a published poem if you retain copyright, but please include publication data. This applies to poems published in books, journals, newspapers, or on the Internet. Poems already used on this blog are not eligible to win, but the poets may submit a different poem, unless the poet has been a winner the last three months.

The deadline is January 15. Poems submitted after the deadline will not be considered. There is no charge to enter, so there are no monetary rewards; however, winners are published on this blog. Please don’t stray too far from “family-friendly” language (some children and teens read this blog). No simultaneous submissions, please. You should know by the end of the month whether or not your poem will be published. Decision of the judge or judges is final.

The poet retains copyright on each poem. If a previously unpublished poem wins and is published elsewhere later, please give credit to this blog. I do not register copyright with the US copyright office, but by US law, the copyright belongs to the writer unless the writer assigns it to someone else.

If the same poet wins three months in a row (which has not happened thus far), he or she will be asked not to submit the following two months.

Send one poem only to wildamorris4[at]gmail[dot]com (substitute the @ sign for “at” and a . for “dot”). Put “January Poetry Challenge Submission” FOLLOWED BY YOUR NAME in the subject line of your email. Include a brief bio that can be printed with your poem if you are a winner this month. Please put your name and bio UNDER THE POEM in your email and/or attachment. If the poem has been published before, please put that information UNDER the poem also. NOTE: If you sent your poem to my other email address, or do not use the correct subject line, the poem may get lost and not be considered for publication. Do not submit poems as PDF files. Pease excuse repetition in stating the rules. You might be surprised how many poets do not adhere carefully to the rules.

Submission of a poem gives permission for the poem to be posted on the blog if it is a winner, so be sure that you put your name (exactly as you would like it to appear if you do win) at the end of the poem.

Poems may be pasted into an email or sent as an attachment (Doc, Docx, rich text or plain text; no pdf files, please). or both. Please do not indent the poem or center it on the page. It helps if you submit the poem in the format used on the blog (Title and poem left-justified; title in bold (not all in capital letters); your name at the bottom of the poem). Also, please do not use multiple spaces instead of commas in the middle of lines. I have no problem with poets using that technique (I sometimes do it myself). However I have difficulty getting the blog to accept and maintain extra spaces.

Edgar Guest worked for the Detroit Free Press, beginning as a copy boy, eventually joining the news room, and later writing his own column. He published twenty volumes of poetry. For more than ten years, he had a weekly radio program. He was known as "the People's Poet" because of the popularity of his rhymes.

Caroline Johnson has two illustrated poetry chapbooks, Where the Street Ends and My Mother’s Artwork, and a full-length collection, The Caregiver (Holy Cow! Press, 2018), inspired by years of family caregiving.  In 2012 she won the Chicago Tribune’s Printers Row Poetry Contest, and she was nominated for the Pushcart Prize and Best of the Net. She has led workshops for veterans and other poets on such topics as Poetry and Spirituality, Speculative Poetry, and Writing About Chicago. She currently serves as president of Poets & Patrons of Chicago. Visit her at www.caroline-johnson.com.

Marilyn L. Taylor, former Poet Laureate of Wisconsin and of Milwaukee, is the author of eight collections of poetry, the most recent of which, titled Step on a Crack, was published by Kelsay Books in 2016. Her poems and essays have appeared in many anthologies and journals, including Poetry, Measure, Light, Rhino, Aesthetica, and the Random House anthology, Villanelles. Her own widely-read “Poet to Poet” column on craft appeared bi-monthly for five years in The Writer magazine, and she currently serves as a co-editor for Third Wednesday and Verse-Virtual poetry journals.