Thank you to the poets who submitted "night poems" for the July Challenge.

Thank you, also, to the four judges, each of whom is a contributor to the Wisconsin Poets’ Calendar 2012. They are Doris Bezio, Susan Gibson, Charlotte Johnson and Mary Cleary Krauss. Selection of the winning poem was not easy, as evidenced by the fact that three different poems received first place votes.

Congratulations to Gail E. Goepfert, whose poem was selected as first by two of the judges and second by the other two.


Nightly in the Summer Garden

Let’s walk the plantation, she said--
such a grand name
for their early evening stroll
to admire all that she had planned
all that he had planted
to survey all that spoke
green in the summer garden.

Her words carried by fireflies
mingle with the garden perfume

A pink gerbera daisy is poking
through its tunnel of leaves.

Look—violet clematis weaving
along the fence and
five buds on the tea rose--
I’ll cut one for the morning room.

Ivy just creeps across the cocoa beans
Honey, the impatiens need a drink.

Oh, we’d better go inside--
mosquitoes are starting to bite,
and you know how they love you,

and nightly, the door closes behind them.

~ Gail E. Goepfert
Poets published on this blog retain copyright to their poems.

Here are some of the comments made by the judges concerning this poem:

“I like this woman who loves her garden.”
“The shared conversation is a nice touch.”
“Love the phrase ‘all that spoke green’”!

If you are interested in purchasing the Wisconsin Poets’ Calendar 2012, go to http://wfop.org/ and click on the cover picture.


I will try to post the August Challenge on time, but it is likely to be delayed, due to the death of my mother. 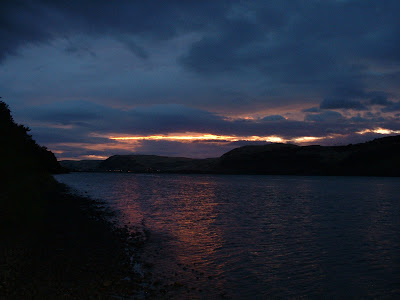 Night has long been a favorite subject of poets. Here are three old, serious poems about night, followed by a contemporary, whimsical poem of mine. The older poems are all rhymed and metered; mine is free verse. Each creates a different mood. Longfellow’s is more metaphoric than that of Wordsworth or Browning. Wordsworth’s has a somewhat pastoral feel, which Longfellow’s poem does not have. Browning’s poem is a narrative love poem. To what lengths will the poet (or his persona) go for a night tryst with one he loves?

My poem takes off from the idea found in children’s stories (books and movies) that the nursery toys come awake at night. I didn’t think children should have all the fun of imagining what might happen in the house after all the lights are out and the human beings are asleep.

The Sun Has Long Been Set

The sun has long been set,
The stars are out by twos and threes,
The little birds are piping yet
Among the bushes and trees;
There's a cuckoo, and one or two thrushes,
And a far-off wind that rushes,
And a sound of water that gushes,
And the cuckoo's sovereign cry
Fills all the hollow of the sky.
Who would "go parading"
In London, "and masquerading,"
On such a night of June
With that beautiful soft half-moon,
And all these innocent blisses?
On such a night as this is!

Hymn to the Night

I heard the trailing garments of the Night
Sweep through her marble halls!
I saw her sable skirts all fringed with light
From the celestial walls!

I felt her presence, by its spell of might,
Stoop o'er me from above;
The calm, majestic presence of the Night,
As of the one I love.

I heard the sounds of sorrow and delight,
The manifold, soft chimes,
That fill the haunted chambers of the Night,
Like some old poet's rhymes.

From the cool cisterns of the midnight air
My spirit drank repose;
The fountain of perpetual peace flows there,—
From those deep cisterns flows.

O holy Night! from thee I learn to bear
What man has borne before!
Thou layest thy finger on the lips of Care
And they complain no more.

Peace! Peace! Orestes-like I breathe this prayer!
Descend with broad-winged flight,
The welcome, the thrice-prayed for, the most fair,
The best-beloved Night!

The gray sea and the long black land;
And the yellow half-moon large and low:
And the startled little waves that leap
In fiery ringlets from their sleep,
As I gain the cove with pushing prow,
And quench its speed i’ the slushy sand.

Then a mile of warm sea-scented beach;
Three fields to cross till a farm appears;
A tap at the pane, the quick sharp scratch
And blue spurt of a lighted match,
And a voice less loud, through joys and fears,
Than the two hearts beating each to each!

The three poems above are all in the public domain. The poem below is copyright-protected.

Here it’s not nursery toys
that come alive in the night
but clothes in the closet.
Your coveralls and my denim jacket
leap through the window
to rock on the porch swing.
They sidle over to the garden,
take nips from a bright red tomato
before joining neighbors
in a square dance.

One of your brown leather boots
gives a playful kick to my sneakers
which string along.
Didn’t you notice those footprints
leading out to the pasture?
All their eyes look skyward,
finding Cassiopeia’s Chair.
If the inside of your shoe is damp
in the morning, it may be milk
spilled from the Little Dipper.

Your Sunday suit slides
off the hanger, offers an arm
to my flowered silk dress
with the white lace collar.
They dine formally on prime rib
and baked potato, using our silver,
then waltz through the house.
Listen! Don’t you hear
the echo of Strauss?

For more poems on the theme of night, go to http://www.poets.org/viewmedia.php/prmMID/20416
There you will find “The First Night,” by Billy Collins (from his book, Ballistics). To the left of the poem you will find links to other poems about night.

Other interesting night poems include:
* “Nativity,” by Li-Young Lee, in Book of My Nights
* “It’s Always Darkest Just Before the Dawn,” by Kay Ryan, in The Best of It: New and Selected Poems
*“After Dinner,” by Philip Levine, in A Walk With Thomas Jefferson
*“Night: December 15th,” by Alfred Dorn, in Flamenco Dance And Other Poems
*“Night,” by Kazim Ali, in The Far Mosque
*"At Night in the Everglades," by Robin Chapman, in The Only Everglades in the World

The challenge for July is to write a poem about night. Does night bring you pleasure or fear? Does it elicit memory of a special occasion? How did you experience night as a child? Have you heard a child speaking about the night? Your poem may be formal or free verse. If using a form, please identify the form. The winning poem will be published on this blog.

Poems published in books or on the Internet (including Facebook and other on-line social networks) are not eligible. If your poem has been published in a periodical, please include publication data. Poems submitted after the July 15 deadline will not be considered.

Send your poem to wildamorris[at]ameritech[dot]net (substitute the @ sign for “at” and a . for [dot]. Be sure provide your e-mail address. Submission of a poem gives permission for the poem to be posted on the blog if it is a winner. The deadline is July 15. Copyright on poems is retained by their authors.