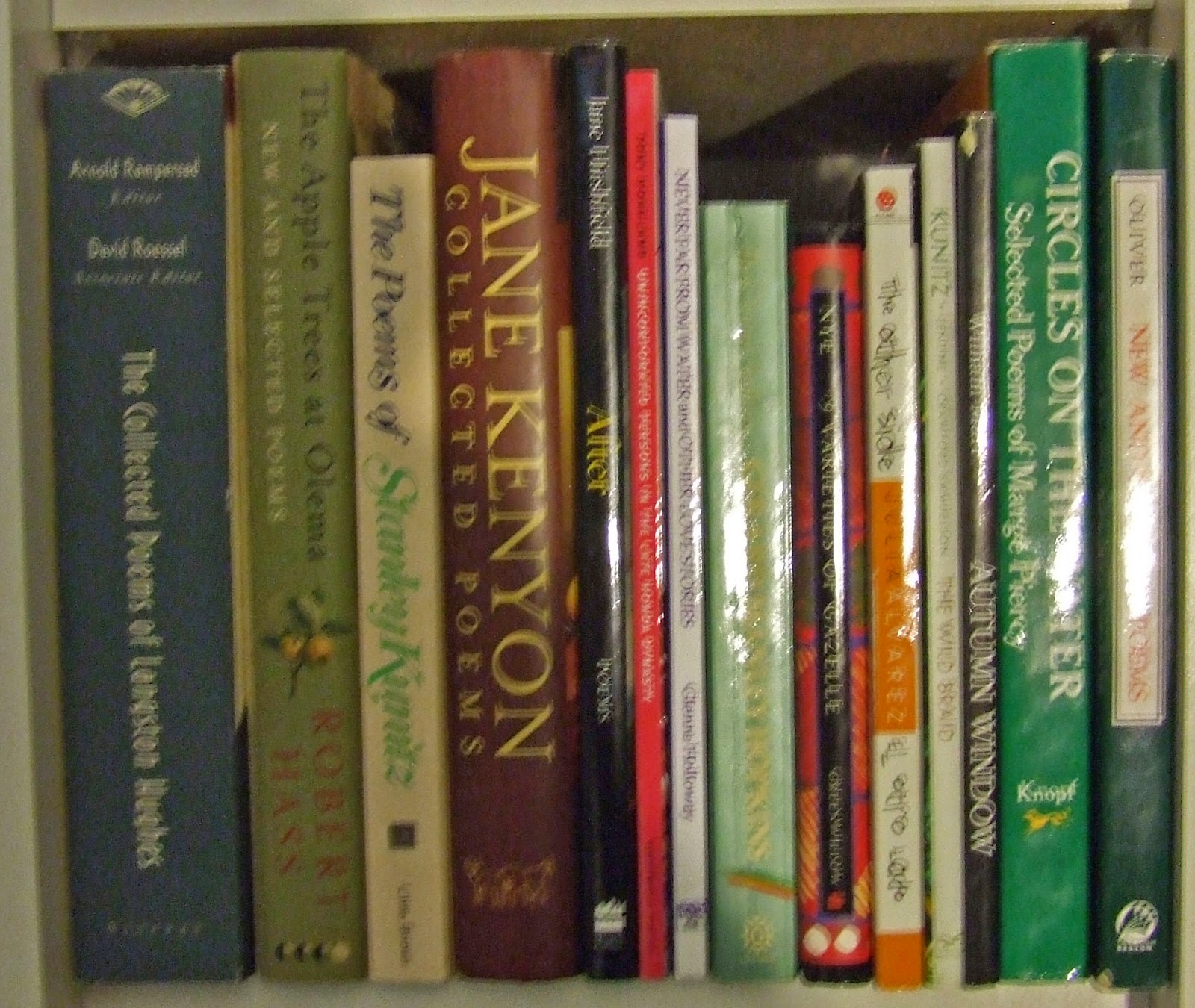 I recently read "Why I'm Not a Carpenter," by Tony Barnstone, in his new book, The Beast in the Room (The Sheep Meadow Press, 2014), pp. 12-14. The narrator of the poem is working along side his brother on a carpentry job. The brother hits the nails just right, in an iambic rhythm. The narrator warps the nail, because "half my mind's / trying to write a poem." Any poet can identify with that! Often "half my mind's trying to write a poem" as I do dishes, vacuum the floor, drive to church, or engage in other tasks.

Words promenade the world searching
for the essence of man’s being,
from spring through winter of his life.
My lyrics, the soul of man’s strife

embroider visions of grandeur,
and when life’s plan takes a detour
they celebrate with drum and fife.
My lyrics, the soul of man’s strife

resound with song, death’s elegance,
though they too will know its silence.
Are they redemption or just rife,
my lyrics, the soul of man’s strife?

Words promenade the world searching
for lyrics, the soul of man’s strife.

Timm is a retired physician living with his partner in Chicago. His work has appeared in numerous journals, and his debut novel, Square Affair, will be available soon in bookstores and on Amazon. Timm also writes a weekly blog, Home Town Tales, where he reminisces about life remembered in a small Midwestern town.

The free verse poem is an extended metaphor which may send some readers to the dictionary.

All the poets I know are snakes;
we’re skin-shedder types composing
one uncommon one line in common Times Roman Bold,
another rare line, sans serif, in dainty Arial, italicized.

We are the ouroboros symbolically
taking tales into our cotton mouths.
We rattle; primordial bones stir.
We hiss; the limbic speaks.

One among us squiggles the couplets of Cleopatra’s asp.
Another’s masked in a villanelle à la fer-de-lance.
Yet another uncoils her mamba-tanka.
I, however, am a sonnet’s charming cobra.

I stare.
You are mesmerized.

An eight-time Pushcart-Prize nominee and National Park Artist-in-Residence, Karla Linn Merrifield has had some 500 poems appear in dozens of journals and anthologies. She has ten books to her credit, the newest of which are Lithic Scatter and Other Poems (Mercury Heartlink) and Attaining Canopy: Amazon Poems (FootHills Publishing). Forthcoming from Salmon Poetry is Athabaskan Fractal and Other Poems of the Far North.  She is assistant editor and poetry book reviewer for The Centrifugal Eye (www.centrifugaleye.com). Visit her blog, Vagabond Poet, at http://karlalinn.blogspot.com.

Timm and Karla maintain copyright on their poems.

Congratulations to both of the winners, and thanks to the judge. Although John is from Chicago, I never met him in San Miguel de Allende, GTO, Mexico, where we have both attended the San Miguel Poetry Week. His sense of humor makes him a popular open mic reader.

John Milkereit is a rotating equipment engineer working at an engineering contracting firm in Houston, TX. His poems have appeared in various literary journals such as Big River Poetry Review and San Pedro River Review. His chapbooks are Home & Away and Paying Admissions (Pudding House Press, 2010). He is currently enrolled in the second year of a low-residency M.F.A. program in Creative Writing at the Rainier Writing Workshop in Tacoma, WA.