March 2019 Winner - What I Learned From a Child

There were fewer poems than usual in March. Some were about children but not clearly about something the poet learned from a child. I hope that doesn’t mean that few poets take the time to listen to and observe children necessary from learning from then. As I said at the beginning of the month, listening to children is as important as talking to them. When we truly listen, we learn about them, but we also learn from them. And we let them know they are valued. (Okay, enough pontificating. I don’t usually do that on this blog.)

The judge, Linda Wallin, picked a short, fun poem, written by a grandmother, the fun-loving kind of grandmother with whom children like to spend time. Here it is:

I taught my grandson to say,
“See you later, alligator.
After while, crocodile.”

But then
when it came time
to leave my home,
he said to me,
“See you later, crocodile.”
He wanted me to reply,
“After while, alligator.”

So I did,
and learned
this is lots more fun!

Linda Wallin taught disabled students full-time for 25 years and currently teaches gifted children Lego Robotics at the Center for Gifted at National-Louis University. She has three children and two grandchildren who bring her great joy. When she is not on the computer, she is quilting, reading or writing. Her web sites include www.dwna.net, Wallin’s Wave, A Boomer Retirement, and Living With Geniuses.

Check back late on April 1 for the April Poetry Challenge.

Labels: Deetje J. Wildes, Linda Wallin, What I learned from a child 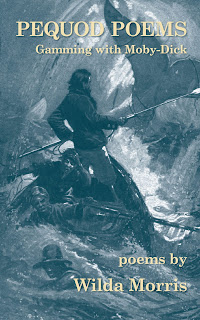 What they are saying about Pequod Poems:

One doesn’t have to be a literary scholar to deeply admire and enjoy Wilda Morris’s “Pequod Poems: Gamming with Moby Dick”—a brilliant compendium of literary insight, criticism, historical research, and especially her skillfully written poems. Among the many delights of the latter are reflections narrated by some of Melville’s most unforgettable characters—Ishmael, Queequeg, Starbuck, and Ahab himself, of course—as well as by members of Melville’s memorable supporting cast that includes Pip, Stubb, the Maltese sailor, and a salty host of others, along with confidences from Ahab’s and Starbuck’s distant wives. Morris also reveals her impressive mastery of poetic forms: the sonnet, the sestina, the rondeau, and—somewhat surprisingly, in this context—a wide range of newer, more obscure forms such as the Golden Shovel, the erasure poem, and the lipogram. Suffice to say that whether it’s erudition you’re seeking, or poetic virtuosity, or simply an imaginative retelling of a phenomenally good story, you’ll find yourself rewarded by taking a close look at Wilda Morris’s remarkable Pequod Poems.

"Wilda Morris' Pequod Poems is a stunning and deeply imagined collection. Employing both traditional and invented forms, Morris creates a rich sonic and linguistic world in which Melville's characters explore their complex lives and reveal to us our own."
~ Justen Ahren, Poet Laureate of Martha’s Vineyard and author of A Strange Catechism

Whether or not you've read Moby-Dick, Wilda Morris's book is a wonderful companion. Like Melville's masterpiece, it is formally adventurous, deeply entertaining, both funny and philosophical--and redolent of the sea. I learned things about Moby-Dick, about language, and about the human condition from these fine poems
~ Will Hansen, Director of Reader Services and Curator of Americana and facilitator of adult education classes on Moby-Dick, Newberry Library, Chicago

How this book came to be:

I made the mistake of not taking any literature courses in college. A decade or two ago, I decided to fill in some gaps in my education—mostly by listening to CDs while driving. I listened to Anna Karenina, The Heart of Darkness, Tom Sawyer, and other “classic” novels. I found a recording of Moby-Dick at my public library and started my long voyage with Herman Melville.

Finding many quotable lines, I was entranced by his use of language. I began copying sentences I especially liked into a notebook. Over the next few years, I took a course on Moby-Dick at The Newberry Library in Chicago—and signed up for a repeat a couple of years later. I listened to Moby-Dick on CD again (and again), absorbing a bit more each time. And
becoming more and more convinced of the relevance of Moby-Dick for our time.

I wrote poems about the characters and plot. I wrote poems responding to and contemporizing quotes from the book. And I memos to Melville, sometimes asking questions I wish I could ask him in person. I wrote a few poems about Melville himself. With the help of poet friends, I revised and edited, and culled out poems that didn’t seem quite good enough.

How to Purchase Pequod Poems:

There are three ways to order this new book:
1) If you want an autographed copy, email me at wildamorris[at]Ameritech[dot]net (replace the [a] with @ and the [dot] with a period) and I’ll tell you where to send a check for $20, which will cover the cost of the book, plus shipping and handling.
2) Purchase through the publisher website at https://kelsaybooks.com/products/pequod-poems-gamming-with-moby-dick.
3) Purchase via amazon.com at https://smile.amazon.com/s?k=pequod+poems+morris&crid=1DRC0B3DKGR5Q&sprefix=Pequod%2Caps%2C173&ref=nb_sb_ss_i_2_6.

Email me if you have any questions.