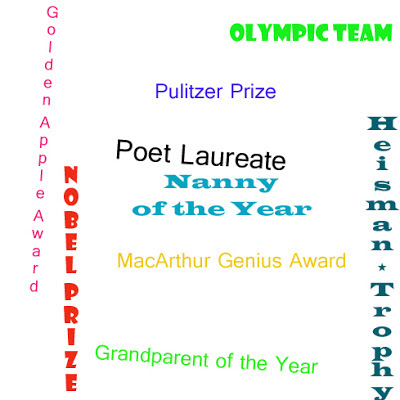 Congratulations to Eve Lomoro, who submitted the winning poem this month.

I’m seeking your vote as the Nanny of the Year.
Here’s why:

The youngest one, they said
can be a handful. Has tantrums,
doesn’t cooperate, she’s stubborn
as a donkey straining
against his owner’s rope.
That’s what they told me, going in.

At preschool she hangs her head down
to her chin, and refuses to speak.
Driving home, I ask about her day,
she drops her head lower.
Petrified, I stop talking.

Do you want a snack? I ask.
She shakes her head.
A response – real progress.
Do you want to play? A silent no.
She’s tough, I think,
but I’m tougher.

She mumbles something. I lean down.
I can’t hear you, I say.
I want to go downstairs – by myself.
Emphasis: By myself. She goes.
I consider my next move.

She jumps from the back of the couch
into the seat. Stop, please. I want to talk.
She sits down, and I sit in a child’s chair,
facing the little darling.
We’re going to be great friends, you know,
so why not start now?

I hide behind my hand,
peek through my fingers,
and hear a very small giggle.
I duck behind a pillow, and hear
more giggles, louder, more
and more giggles.

We watch a cartoon,
but not really—she’s jumping again.
Jump on me—I’ll catch you.
She looks at me, deciding if she can trust me.
I won’t drop you, I say. I promise.

She dives, and I catch her,
put her upright again. She giggles.
We do this over and over.
She’s beginning to like me, I think.

Third day, she comes back
for more jumps—ten and then
one more. This time, when I catch her,
she stays, squiggling into the curve of my arm.
We cuddle and watch the cartoon.

This is why I should win your vote – I’m Mary Poppins.

Judges for November were again Jim Lambert and Jacob Erin-Cilberto. The judges said their favorite part of the poem was the last line.

Jim lives lives with his wife of 47 years and two 28 year-old desert tortoises near Carbondale, IL. He is active in community theater. His poetry book Winds of Life was published in 2007. Jacob lives and teaches in Southern Illinois. He has been writing and publishing poetry since 1970. His 12th and most recent book, Used Lanterns is available from Water Forest Press, Stormville, NY. Jacob has been nominated for a Pushcart Prize in poetry 2006-2008 and again in 2010.

Thank you to the judges, and those who entered the September challenge. Congratulations to the winning poet.Stop by soon to see the December challenge 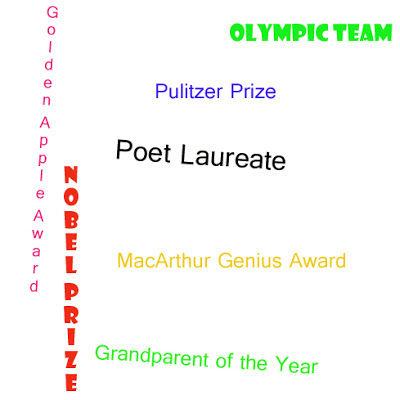 George W. Bush was president of the US when Jim Lambert wrote his poem, “Jim Lambert for Poet Laureate.” Only one line of this poem would have been different had it been written during the Obama Administration however.

Ladies and Gentlemen of the Committee
I come before you today
To nominate Jim Lambert and to
Embellish his resume.

A superior poet laureate
He would most assuredly make.
It is a grave responsibility
He is more than willing to take.

Academia is normally the source
Of most of your nominees.
Usually published poets
With fancy schmancy degrees.

But let us consider Lambert
For the reasons detailed below
He’s a real sore-fingered poetic machine
With loftier places to go.

From humble rural beginnings,
He was raised down on the farm.
Though he attended public schools,
He suffered little apparent harm.

He served in the U. S. Army--
That should be considered a plus.
Although we admit he was drafted
He refrained from making much of a fuss.

While serving in the Army
He met his beautiful wife.
They went from love at first sight
To together for his entire life.

Mr. Lambert has vast experience
In the outside of government world.
He’s played the corporate game for years
Waiting for his talents to be unfurled.

He’s lived all around the country
And what may interest you the most
Is that he’s never had a permanent address
Any where on the eastern coast.

Lambert has no skeleton to hide
That might provoke political attack,
But be advised that he may very well be
A tiny percentage Black.

No forebear of his was ever a cad
And certainly none were schrewish.
One was a Native American lass
And one of the guys was Jewish.

But in these enlightened modern times
We’re certain that you will feel
The fact that he is multi-ethnic,
Just adds to his appeal.

So cast your vote and select this man
Who deserves this lofty position
He’ll find for you the perfect rhyme
And in its best rendition.

Say that you want the rich to have
A massive tax reduction,
He’ll write a poem just for that
It’ll be a voter rhyme seduction.

Perhaps you’ll want to go to war
Whether justified or not
He’ll produce a poem in support
He’ll give it his very best shot.

But if he does not succeed at this
Perhaps butchers a Terza Rima,
Then President Bush, without batting an eye,
Can make Lambert the Director of FEMA.

The challenge for November is to nominate yourself for some kind of major award or position. Maybe you will follow Jim Lambert’s example and nominate yourself for Poet Laureate. Maybe, though, you’d rather win a Pulitzer Prize, a place on an Olympic team, the presidency or premiership of your nation, a MacArthur Genius Award or a Nobel Prize. Or perhaps you would like to be named Mother, Father or Grandparent of the Year. Whatever award you dream of winning, write a poem nominating yourself. Your poem might be serious, or it might be tongue-in-check.

Your poem may be in free or formal verse (if you use a form, specify which form it is). Please put your name at the bottom of the poem (note the format used above).

Poems must be in English (due to my lack of skills in other languages), original and property of the poet making the submission. Poems published in books or on the Internet (including Facebook and other on-line social networks) are not eligible. If your poem has been published in a periodical, please include publication data. Poems submitted after the November 17 deadline will not be considered.

Send your poem to wildamorris[at]ameritech[dot]net (substitute the @ sign for “at” and a . for [dot]). Be sure provide your e-mail address. If you want a bio published with your poem should it be a winner, please include put a brief bio below your poem. Submission of a poem gives permission for the poem to be posted on the blog if it is a winner. Due to the fact that I did not get the Challenge posted until November 3, the deadline is November 17, 2012. Copyright on poems is retained by their authors.