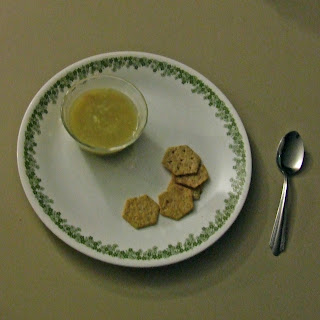 Congratulations to Eve Lomoro, writer of this six-line poem.

Eve Lomoro has been writing for many years, mostly prose. She has completed one novel (unpublished as of yet), and is at work on another. Recently, she has become more serious about poetry, and has joined a poetry group that meets monthly. She says her interest in poetry has made her prose more colorful. "Hardly Ever" was written about a subject very close to her heart; she has a passion about world hunger, especially hungry children.

Poets retain copyright of poems published on this blog.


More about the judge: Larry Turner moved to Fredericksburg, VA after retiring as physicist from Argonne National Laboratory near Chicago. His poetry has appeared in many journals including Kansas Quarterly, The Lyric and Spoon River Quarterly. He has published two books of poetry, Stops on the Way to Eden and Beyond in 1992, and Eden and Other Addresses in 2005. In 2011, he published Wanderer, a collection of poems, stories and drama. Currently he is editing an anthology for Riverside Writers, as he has done three times previously. While living in Illinois, he took several poetry classes at the College of DuPage and produced a television series, Writers Read on Naperville Community Access Television. 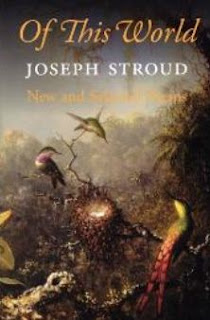 Joseph Stroud’s book, Of this World: New and Selected Poems (Copper Canyon Press, 2009), begins with 84 six-line poems. He calls the section, “Suite for the Common.” With one exception (to be discussed later), the lines in each particular poem are of roughly equal length. The poems in this “Suite” cover a multitude of themes: childhood, responses to literature and objects of art, family and relationships, travel, and death. A variety of poetic devises, including metaphor, assonance, alliteration, and internal rhyme, have been used to enrich the collection.

I have not discussed the intended meaning, if any, of these poems or the poetic techniques with Stroud. Another reader probably would selected different favorites from the set, and would highlight different poetic techniques. This commentary on the poems is my subjective response.

“Night in Day,” one of my favorites from “Suite for the Common” is posted on the website of The Poetry Foundation. You can find it at http://www.poetryfoundation.org/poem/237296#poem.

Having read this poem, I will never again view obsidian, crows or watermelon seeds in the same way.

Reading the poetry carefully, I notice that the words “light” and “night” are each used twice, giving the poem internal rhyme. The poem has just the right amount of alliteration—enough to enrich the poem without calling attention to itself and thus diverting the reader’s attention. On first reading I was not fully aware of the “g” sound until I read the last line although it occurs in “give,” “great,” “guzzle,” “glistening” and “grass.”. Reading the poem aloud now, though, I see how that sound serves to link the six lines sonically. The “t” and “s” sounds also enhance the sound of the poem.

My husband, who isn’t too fond of poetry as a rule, got a chuckle out the following poem when I read it to him:

The Life of a Dog

Marie understands: Go get your rug! Want to go for a ride?
Time to eat! Where’s your toy? BAD dog! GOOD dog!
But she has problems with Come back here! Don’t jump
on the guest! At times when we’re alone, when she’s looking
pensive, I’ll say to her slowly and sadly, What do you think
of existential angst? She’ll look up and her tail will wag & wag.

A lot of people can identify with this poem. If you don’t have a dog, you may have a child who doesn’t understand, “Come back here!” Or a cat like one we used to have who hid from guests, unless the guest in question hated or feared or was allergic to cats. Then she delighted in creeping out of the corner, and jumping in their lap. I suppose most people with pets sometimes wonder what their animal friends are thinking, especially when they are “looking pensive.”

I wonder if Stroud drafted this poem, then moved the instructions to Marie around or if they fell into this order immediately. Was he intentional in putting the sentences with “rug” and “ride” on the same line? And on the next line, “time” and “toy”? This organization of the lines works well. The strongest part of the poem is the ending. It is humorous and ironic. Also, the “a” in “wag” echoes the “a” from “angst” at the end. Rereading the poem, it is easy to identify the assonance given the entire poem by the short “a” sound, beginning with the word “understands.”

Some of the poems are much more serious.

The Executions on Príncipe Pío Hill

I stand before the Goya in the Prado,
so close all I can see is paint, but if I step back,
a scene appears—men against a wall, soldiers
aiming rifles—so I keep stepping back—
across an ocean, across time, backing away,
hoping it will focus into something I can bear.

This poem shows the narrator standing before Goya’s powerful painting of French soldiers executing Spanish men who resisted Napoleon’s attempted take-over of the Iberian Peninsula. The desire to back away and not see so clearly is an elegant way of showing (not telling) that the painting has a strong visceral impact on the viewer.

The poem can be a metaphor for the very human desire not to see such things, for fear we might feel called upon to respond—and thus end up against the wall with these victims.

For me, one of the sonic effects that stands out is the use of the two words with the long “a”: painting and aiming. Obviously they are not exact rhymes, but that sound stands out in this short work. For me they heighten the drama of the artist depicting (in a modern way) the impact of warfare. Another sound effect that seems especially appropriate to the subject matter is the seven-fold repetition of the “k” (or hard “c”) sound. In my subjective reading, that sound stands for the repeated shots from the French guns.

You can find pictures of Goya’s painting on numerous websites, including http://www.museodelprado.es/en/the-collection/online-gallery/on-line-gallery/obra/the-3rd-of-may-1808-in-madrid-the-executions-on-principe-pio-hill/.
As I mentioned earlier, one poem in the set breaks the pattern of making all six lines roughly equal in length.

This poem, I think, does an excellent job of depicting grief. In my reading, the missing half line says more eloquently than words could, that sometimes there is nothing to say. Much more could be said about this poem.

You may have guessed by now that the challenge for February is to write a poem of six lines of relatively equal length. The theme is open. Use various poetic devises, but don’t overdo it. No poems with rhymed couplets or other regular rhyme, please (save them for another time). Poems which could have been slipped into Stroud’s “Suite for the Common” will have the advantage, but make it your own in some profound way.

How to Submit Your Poem
Please put your name at the bottom of the poem (note the format used above). Poems published in books or on the Internet (including Facebook and other on-line social networks) are not eligible. If your poem has been published in a periodical, please include publication data. Poems submitted after the February 15 deadline will not be considered.

Send your poem to wildamorris[at]ameritech[dot]net (substitute the @ sign for “at” and a . for [dot]). Put "February Poetry Challenge" in the subject line of your email. If you want a bio published with your poem should it be a winner, please include put a brief bio below your poem. Submission of a poem gives permission for the poem to be posted on the blog if it is a winner. The deadline is February 15, 2012. Copyright on poems is retained by their authors.

Joseph Stroud’s poem used with permission from the author. They are all from Of this World: New and Selected Poems (Copper Canyon Press, 2009), pages 3 (“Night in Day”), 11 (“Life of a Dog”); 26 (“An Execution on Príncipe Pío Hill”), and 14 (“My Father Died”). The book contains numerous longer poems of various kinds, including odes, narrative poems, and compressed lyrics.

Stroud has published several other collections of poetry, including Signatures (1982); Below Cold Mountain (1998); and Country of Light (2004), a finalist for the 2005 Northern California Book Critics Award. Stroud, a Pulitzer Prize winner, was awarded a Witter Bynner Fellowship by the Library of Congress. He lives in California, where he divides his time between Santa Cruz and a cabin in the Sierra Nevada mountains. I had the pleasure of meeting him and hearing him read from his work at the 2012 San Miguel Poetry Week in Mexico (http://www.sanmiguelpoetry.com/).
© 2013 Wilda Morris