October Challenge - A Twist on the News 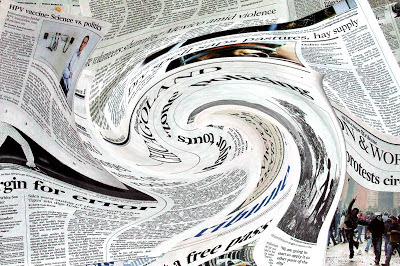 Judges for the October Challenge were Judith Tullis and John Quinn, whose poems provided inspiration for this contest. You can find their bios at www.illinoispoets.org.

One of the winning poems is “What’s Happenin’.” It reminded me of the hours I’ve spent reading old Kansas newspapers, looking for hints into the lives of my great-grandparents, who were among the early European-American settlers of Lincoln, Kansas. The Chicago Tribune, New York Times, Washington Post, and other major newspapers, don’t report it when someone goes out to hunt buffalo, attends a bridal shower, or catches a very large beaver in his trap! When I was a child, the Iowa City Press Citizen still did report visitors from out of town and other social events; I’m not sure if they still do or not. I do know that, like most other papers, they charge by the inch for obituaries. Peggy Trojan’s poem made me nostalgic for the days when a local paper—or someone in the neighborhood—put to paper the small news that is big news for family and friends.

Selma Makkela
printed all the news fit to print.
The Hemmilas had a boy,
Erickson’s cow was hit by lightening,
the Polks motored to Chicago
for their grandson’s graduation.
Nothing to cause you anger
or “take to bed worry.”
When you saw Willard
at the feed store, you could ask how
Mildred’s broken leg was coming along,
send an anniversary card
to the Mattsens,
keep an eye out for
Johnson’s lost calico cat.
The news connected you
to community,
safe in the knowledge
you were informed enough
to know just what
was going on.

We’ll Be Right Back…

I switch the TV on each night,
Those grinning anchors are a sight.
They laugh and joke, never seem sad,
Chatter brightly when times are bad.
What they report we’re told is news.
While they’re on screen, I sometimes snooze.
The ads are what I want to see,
Because they speak the truth to me.

If I opt for this famous beer,
Attractive girls will gather near.
They’ll ogle me, admire my brawn,
We’ll party hard until the dawn.
The credit card that I select,
Will gain for me utmost respect.
I’ll get cash back each time I spend,
A most ingenious dividend.
A tiny pill makes me a man,
A harmless boost to nature’s plan.
No longer fear of growing old,
My prowess will increase tenfold.
An auto plays a crucial role,
Ensures I’ll reach my lofty goal.
It’s pre-ordained that I’ll be seen,
As prosperous in this machine.

It’s often said, there’s no free lunch,
So I endure that anchor bunch.
Resign myself to suffer through
More cat rescues, bad interviews.
But when, We’ll be right back, they plead,
What follows them is what I need.
I don’t learn much from nightly news,
Those cool commercials shape my views.

I’ve seen those commercials, too! Maybe if I get a different car, or use a different shampoo, I could win the Pulitzer Prize? ? ? ?

If you would like to read some of my poems, check the links on the right side of this page.

Check in on November 1 to see the next poetry challenge. You might be the winner next time! 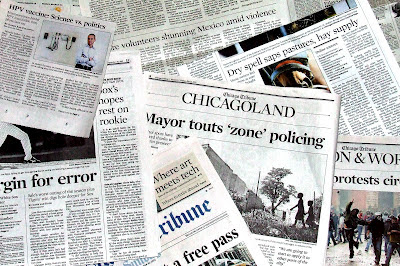 On the last Sunday of each month, there is a poetry reading at the Brewed Awakening, a coffee shop across from the train station in Westmont, IL. The readings are sponsored by the Illinois State Poetry Society (see www.illinoispoets.org for announcements concerning upcoming featured poets). Two excellent poets, Judith Tullis and John Quinn, were featured on Sunday, September 30. Each one read a poem about the news (or someone’s response to the news), not a heavy or sad or angry poem, but a poem with a lighter touch and a bit of humor. John’s poem is a sonnet; Judith’s is free verse.

Alar on apples! Asbestos in school!
Our water's not fit for your pasta fazool!
Radon in basements! Be cautious in love!
Watch out! Beware! There's no ozone above! Chlorine's a crime! So's driving to work!
Cigarette smoking's the realm of the jerk!
Stay out of the sun! Don't play in the street!
Fried eggs are verboten, so is red meat! The stuff my dad worked so hard to obtain
are now objects of fear, loathing, disdain.
"The good things of life," we all tried to get
are getting us now, it's our life we bet. Whatever we do, we'll all end up dead
unless, as we rise, we crawl under our bed.

Every morning
he reads the newspaper
through the steam from
his coffee – Boston, two sugars.

Every day in a plaid flannel shirt
and worn slippers, he confers
in the paper with heads of state,
beleaguered economists, city officials.

He coaches the Bears,
consults the weatherman
and test drives the latest
foreign luxury car.

Every day through the steam
from a mug of orange herbal tea,
across a kitchen table set for two,
I read him.

Write a light or humorous poem about the news—whether the news comes from radio, television, or the internet—or second hand from friends. No angry poems. No partisan poems. No heavy-duty advocacy poems for or against the UN, the US, Iran, North Korea, abortion, legalization of marijuana, etc. Advocacy has its place, but the challenge for this month is a poem which will bring a smile, not make the reader angry (pro or con). Your poem may be in free or formal verse (if you use a form, specify which form it is). Please put your name at the bottom of the poem (note the format used above).

Poems published in books or on the Internet (including Facebook and other on-line social networks) are not eligible. If your poem has been published in a periodical, please include publication data. Poems submitted after the October 15 deadline will not be considered.

Send your poem to wildamorris[at]ameritech[dot]net (substitute the @ sign for “at” and a . for [dot]). Be sure provide your e-mail address. If you want a bio published with your poem should it be a winner, please include put a brief bio below your poem. Submission of a poem gives permission for the poem to be posted on the blog if it is a winner. The deadline is October 15, 2012. Copyright on poems is retained by their authors.