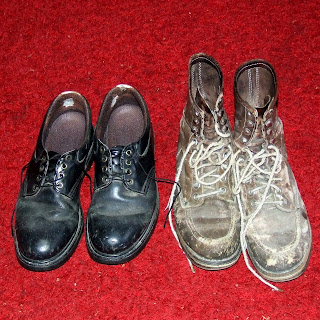 For several years I have participated in a small poetry group which meets in a small sandwich and bakery shop. Each month when we meet, one person brings a poem they have read somewhere (usually in a book or journal, but sometimes on–line). The poem is read aloud and discussed for a while, then we close our mouths and take up our pens or pencils. I am continually amazed by the variety of poems which result from the inspiration of one interesting poem. Each poet brings her (yes, this group is only composed of females, but that would not have to be the case) own life experiences, interests, prior knowledge of poetry and of the “world” inhabited by the poem.

The January Challenge invites you to read and enjoy a poem by Merle Hazard. Read it aloud as well as silently. Discuss (if only with yourself) whatever strikes you about the poem and what it reminds you of. Then follow the further instructions below:

He tripped on
the loose laces
of banged up
brown oxfords,
socks slopped
around his ankles.

Those leather toes were
scraped and scuffed,
battle-wounded
from hours of
make-believe war
waged in the weedy
vacant lot behind
our house.

Shoes, covered in oozy
brown mud, shed
by the kitchen door
where the dirt dried,
caked and peeled
off cryptic notes
on the door mat.

Little boy shoes
dodged a ball and ran
the bases, raised
dust sliding home.
And on Sunday
those brown oxfords, that
no polish could redeem,
kicked and thumped
the pew back
during too long sermons.

Once my brother
and his friend lured me
beyond my fear of heights
into their tree house.
They scurried down the stick-
and-board ladder, pulling it
after them, leaving me
stranded like Rapunzel
on an ash tree.

The next day I hid
those brown oxfords.
They lurked in the dusty
corner of my closet
while he had to pad
about the house
in bare feet, unable
to set foot outdoors.

The punishment
was a perfect fit.


© Merle Hazard. This poem was first published in The Scene, May 2001.

“Little Brother” has a lot of inspirational possibilities.

Shoes. All sorts of stories could be told about shoes. I remember those high heels

that made me feel sophisticated during my late teen years. The shoes my four-year-old son couldn’t find when it was time to go to church. Baby shoes I put on my first granddaughter’s precious little feet. My nephew having a lot of stitches in his had because he tripped on his shoe laces (a cautionary tale for those of you who don't tie your shoestrings!)

The kind of shoes someone wears may tell you a lot about them. Shoes can be a metaphor for something else. Or you might use metonymy, and let a particular kind of shoe stand for a group of people.

Or little brothers. I have a lot of memories of my “baby brother” Tom, though most don’t have much to do with shoes. I was in high school when Tom was born in December. My older sister and I wrapped him in a blanket and put him under the decorated tree to take his picture, because we thought he was the all-time best Christmas present anyone in the family had ever received. Once Tom scared me by riding his trike too close to the end of the sidewalk – and somersaulted it down into the driveway below. He liked for me to read and reread the same Little Golden Book. I believe the title was Roddy, the Cement Mixer. Tom spent some time with my husband and me after we were married. He played with toy soldiers, using the books off my shelf to build forts – and after he had gone back home, I found a small pair of white socks behind some of the books [That experience shows up in a poem I wrote about war].

These are only some for the prompts that come to me as I read this poem by Merle Hazard. There is also the mud, the tree house, the simile of Rapunzel. . . .

The challenge for January gives poets a lot of options. Write a poem inspired by the poem, “Little Brother.” You can write about shoes, or siblings (during childhood), or anything else mentioned above. Or if inspiration takes you in a different direction, that is also okay, so long as you add a note to explain the relationship of your poem to this one.

Your poem may be in free or formal verse (if you use a form, specify which form it is). It may be a serious poem or a light one. A poem with both depth and poetic artistry will have the best chance of winning.

Please put your name at the bottom of the poem (note the format used above). Poems published in books or on the Internet (including Facebook and other on-line social networks) are not eligible. If your poem has been published in a periodical, please include publication data. Poems submitted after the January 15 deadline will not be considered.

Send your poem to wildamorris[at]ameritech[dot]net (substitute the @ sign for “at” and a . for [dot]). Put "January Challenge" in the subject line of your email. If you want a bio published with your poem should it be a winner, please include put a brief bio below your poem. Submission of a poem gives permission for the poem to be posted on the blog if it is a winner. The deadline is January 15, 2012. Copyright on poems is retained by their authors.