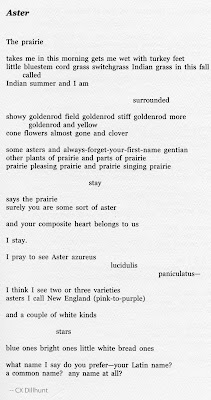 There is a long tradition dating back at least as early as the Song of Solomon (6:2-3) of using flowers in love poetry. A favorite song from 17th century Scotland begins “O my Luve's like a red, red rose/That’s newly sprung in June.” Robert Burns was concerned to save the folk music of Scotland. According to one account, he heard a country girl sing these words, and recorded them for posterity.

One of the best known poems about flowers is by William Wordsworth, written after he and his sister took a walk in the Lake District of England.

Continuous as the stars that shine
And twinkle on the milky way,
They stretched in never-ending line
Along the margin of a bay:
Ten thousand saw I at a glance,
Tossing their heads in sprightly dance.

The waves beside them danced, but they
Out-did the sparkling leaves in glee;
A poet could not be but gay,
In such a jocund company!
I gazed—and gazed—but little thought
What wealth the show to me had brought:

During her lifetime, Emily Dickinson was probably better known as a gardener than as a poet. It is said that she sometimes worked in her garden at night. Many of her poems include flowers. Dickinson’s poems, including those with roses, daisies, lilies and other flowers, are not “simple nature poems.” They tend to be cryptic. More often than not, the flowers are symbolic as in this sample:

The Dandelion's pallid tube
Astonishes the Grass,
And Winter instantly becomes
An infinite Alas --
The tube uplifts a signal Bud
And then a shouting Flower, --
The Proclamation of the Suns
That sepulture is o'er.

and The Gardens of Emily Dickinson

It is easy to become sentimental when writing about flowers, or to fall into the use of clichés. Here are three contemporary poems which avoid these temptations:

From VISITING MORNING AND OTHER QUIET PLACES (Tradewinds, 2008).

Note that Auld is neither sentimental about the beauty of dandelions, nor cranky about their presence on her lawn. The tone of the poem is, on the one hand, matter of fact: the dandelions come, stay for a while and leave as suddenly as they had arrived. Within this staid framework, however, Auld uses imagistic and metaphoric language to make us see the dandelions in a new way. They are “squatters” who “unpack” and “nuzzle in.” The “strewn puffs” are “golden pearls.” And when they float off, they leave their “trash” behind.

CX Dillhunt writes about prairie flowers. There is deep feeling underneath the words: The prairie “takes me in,” the poet says. It tells him to stay, and he stays. There is an element of the list poem here, as he names various kinds of flowers and, later, varieties of Asters. He uses both scientific names and casual descriptions, such as “stars” and “little white bread ones.” The ending is a surprise, as he addresses the flowers, asking what name—if any—they would like to be called.

says the prairie
surely you are some sort of aster

and your composite heart belongs to us

and a couple of white kinds

blue ones bright ones little white bread ones

what name I say do you prefer—your Latin name?
a common name? any name at all?

The poem appears in the box above to show the lay-out Dillhunt chose for his poem. Unfortunately I am unable to retain that layout in this blog. Does the layout remind you of a stretch of wild prairie?

"Aster" is from Girl Saints

Judy Roy’s poem “White Lilacs” can be called a love poem. It is also, however, ekphrastic poetry. Roy is responding not to lilacs in the garden or in a vase on the piano, but to lilacs (and burgundy roses) in a painting by Marc Chagall.

after a painting by Marc Chagall

Two Off Q: A Conversation in Poetry

The challenge for August is to write a poem about a flower or flowers without being sentimental or trite. Will your poem be a formal poem or free verse? Will you use scientific or every-day terms or both? Metaphor or simile? Alliteration or assonance? Will the flower or flowers be symbolic? What new thoughts will the reader have about flowers after reading your poem? Poems published in books or on the Internet are not eligible. If you poem has been published in a periodical, please include publication data.

Send your poem to wildamorris [at] ameritech [dot] net (substitute the @ sign for “at” and a . for [dot], and don’t leave any spaces). Or you may send your poem in a message. Be sure provide your e-mail address. Submission of a poem gives permission for the poem to be posted on the blog, if it is a winner. The deadline is August 15.

The Dorn Septet Challenge is open until September 15. The septet must reflect all the qualities of a Dorn septet as described in the June Challenge, and must have a minimum of three stanzas.

Reason A. Poteet is the winner of the July poetry challenge, to write four short poems on a related theme, each representing a different season. Her haiku sequence invites us to view waterfalls in spring, summer, autumn and fall:

riding the rapids
mom films from the shore
springtime cataracts

Poteet shares many of her poems on her website at http://www.wordchimes.com/poetry/Index.php?viewpoet=514.

The runner-up this month, Francis Toohey, submitted an evocative poem about what the hand does in each of the four seasons:

Winter/ My hand rings the bell--
the echo dissolves, the bell leaves its ghost in my palm.

Spring/ My hand lifts one finger, but the wind dissolves--
the finger folds back to my uncharted lines.

Summer/ My hand grasps a world, grim plum in my grip--
its flesh dissolves to free its single sleeping seed.

Autumn/ My hand counts the birthdays while ten fingers fly--
another year dissolves, weightless at each breath.

Copyright on posted poems remains with the poets who wrote them.

William Marr who was born in China and lives in Illinois is a very prolific poet. He has published numerous books of poetry in his native Chinese, under the pen name of Fei Ma. He is quite well-known as a poet in Taiwan, Hong Kong and China. His work has even been included in textbooks on poetry in China. Marr has also published two books in English. His work has found homes in over one hundred anthologies. Most of Marr’s poems are short, concise and thought-provoking. Some are humorous. In addition to writing and translating poetry, Marr is a painter and sculptor. You can read many of Marr's poems in Chinese or English, and see some of his art work by clicking on the links to the right on this blog.

From 1969 until his retirement in 1999, Marr (who has a Ph.D. in Nuclear Engineering from the University of Wisconsin) did research in energy and environmental systems at Argonne National Laboratory.

In his book Autumn Window, Marr has a set of four poems about birds, each reflecting a season of the year.

If you wish to know
the shortest distance
between two trees
on this bright, enchanting day
any of the small, swift birds
can tell you with their twitter

It’s not a straight line

All that can be green
is green

When did the eyes
become so blurry

Marr’s most recent book of poetry in English, Between Heaven and Earth, can be purchased from at www.publishamerica.net/product91300.html.

A much longer cycle of four seasonal poems is “The Seasons" by Kristijonas Donelaitis found at www.efn.org/~valdas/seasons.html. Donelaitis, a Lithuanian poet, wrote this sequence about the lives of peasants in the mid-eighteenth century in hexameters (a total of almost 3000 lines!).

The challenge for July is to write a series of four brief poems representing the four seasons. There are to be no more than 12 lines in each poem. Select a theme which will tie the four together (in the way birds tie Marr’s poems together). You may use free verse, haiku, or a rhymed form. Poems published in books or on the Internet are not eligible.

Send your poem to wildamorris [at] ameritech [dot] net (substitute the @ sign for “at” and a . for [dot], and don’t leave any spaces). Or you can access my Facebook page and send the poem in a message. Be sure to give me your e-mail address so I can respond. Submission of a poem gives permission for the poem to be posted on the blog, if it is a winner.

; and Haiku Moment: An Anthology of Contemporary North American Haiku

* "Shall I Compare Thee to a Summer's Day" by William Shakespeare, in Shakespeare's Sonnets (Yale Nota Bene)

* “Spring Comes to the Suburbs,” “Good Humor Man,” and numerous other poems by Phyllis McGinley, in Times Three

*“The Fifth of July, by Grace Schulman, in The Broken String

* Many poems by Jane Kenyon, including the series, “Walking Alone in Late Winter,” in Collected Poems

and The Boat of Quiet Hours (Poems)

* The akam poems, which (like haiku) have seasonal references, in Poets of the Tamil Anthologies (Princeton library of Asian translations)

* “Cottonwood” by William Stafford, in Even in Quiet Places: Poems

and History is loose again: Poems

* “November Bargain,” and “Winter Etude” by June Nirschl, and other poems in the joint collection by Nirschl, Nancy Rafal and Judy Roy entitled Slightly Off Q

* “April Fools,” by Christine Swanberg, in The The Tenderness of Memory: New and Selected Poems

* “Language of the Birds,” by Gladyce Nahbenayash in Dreaming History: A Collection of Wisconsin Native-American Writing

* “September afternoon at four o’clock,” and “Snow, snow,” by Marge Piercy, in Circles on the Water

Dorn Septet Challenge: A rhymed Dorn Septet with a minimum of three stanzas. No poems previously published in books or on-line. Deadline September 15, 2010. See the June Challenge for the rules of the Dorn Septet and an example by Glenna Holloway.