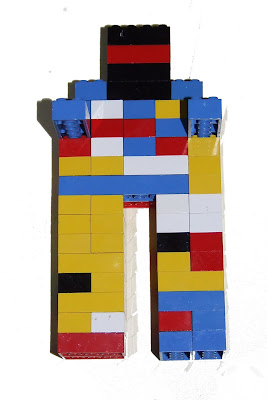 Congratulations to Judith Tullis for winning the December poetry challenge with her poem, "Lego Man." The "Lego man" in this photo, built by my grandson, would not meet the conditions for the Lego man the narrator has in mind in this quirky poem.

There were other excellent poems submitted this month, but none as clever as this one.

I wish I had a Lego man
a hold-tight-will-not-let-go man
a red, white, black or yellow man
a tier above his fellow man
who’d pull himself apart for me
and disconnect his heart for me.
He’d be much better than the last
who never would do what I asked
just smothered me in apathy.

I wish I had a Lego man
an Eggo-in-the-morning man.
We’d sip our coffee hand-in-hand
while brick by brick our life we planned.
He’d never cause a scream from me
nor scheme to take my dream from me.
He would love me to distraction
though he might be short on action
without his Lego battery.

Copyright to this poem remains with the writer.


Watch for a new challenge on January 1. 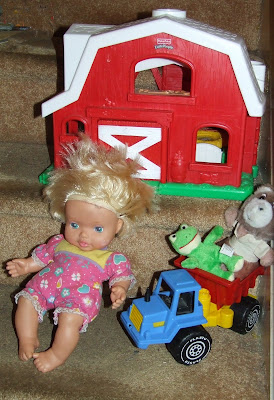 Eugene Field, who was born in 1850 and died in 1895, was especially known for his children’s poems. Appropriately, his boyhood home now houses the St. Louis Toy Museum.

When I was a child, I found Eugene Field’s poem, “Little Boy Blue,” in one of my grandmother’s books. I found it very touching—and very sad. I could see the dust-covered dog and the rusty soldier waiting the return of “Little Boy Blue.” Before I was born, my cousin Junior (age 2) drowned in a well. He was my Aunt Abbie’s first child, my grandparents first grandchild, and my mother’s first nephew. Perhaps that is one reason I was so moved when I read the poem, and—despite the fact that it made me sad—drawn to read it over and over.

The little toy dog is covered with dust,
But sturdy and stanch he stands;
And the little toy soldier is red with rust,
And his musket moulds in his hands.

Time was when the little toy dog was new,
And the soldier was passing fair;
And that was the time when our Little Boy Blue
Kissed them and put them there.

"Now, don't you go till I come," he said,
"And don't you make any noise!"
So, toddling off to his trundle-bed,
He dreamt of the pretty toys;

And, as he was dreaming, an angel song
Awakened our Little Boy Blue---
Oh! the years are many, the years are long,
But the little toy friends are true!

Ay, faithful to Little Boy Blue they stand,
Each in the same old place---
Awaiting the touch of a little hand,
The smile of a little face;

And they wonder, as waiting the long years through
In the dust of that little chair,
What has become of our Little Boy Blue,
Since he kissed them and put them there.

This isn’t the only poem by Eugene Fields which features toys. I suspect that the gingham dog and the calico cat, in his poem, “The Duel,” (another of my childhood favorites) were stuffed animals, though they might just be imaginary creatures. You can find “The Duel” on-line, along with other of Field’s poems, including “The Naughty Doll,” at http://www.theotherpages.org/poems/field01.html
“The Duel” and “The Naughty Doll” are more cheerful and less sentimental than “Little Boy Blue.”

Another favorite poet of an earlier era is Edgar A. Guest (1881-1959). Guest was born in England, but immigrated to the U.S. at age 10. Most of his poetry was not written for children, but it was generally light verse, and often sentimental. As a result, he was known as “the people’s poet.” Here is one of his poems about toys:

I can pass up the lure of a jewel to wear
With never the trace of a sigh,
The things on a shelf that I'd like for myself
I never regret I can't buy.
I can go through the town passing store after store
Showing things it would please me to own,
With never a trace of despair on my face,
But I can't let a toy shop alone.

I can throttle the love of fine raiment to death
And I don't know the craving for rum,
But I do know the joy that is born of a toy,
And the pleasure that comes with a drum
I can reckon the value of money at times,
And govern my purse strings with sense,
But I fall for a toy for my girl or my boy
And never regard the expense.

It's seldom I sigh for unlimited gold
Or the power of a rich man to buy;
My courage is stout when the doing without
Is only my duty, but I
Curse the shackles of thrift when I gaze at the toys
That my kiddies are eager to own,
And I'd buy everything that they wish for, by Jing!
If their mother would let me alone.

There isn't much fun spending coin on myself
For neckties and up-to-date lids,
But there's pleasure tenfold, in the silver and gold
I part with for things for the kids.
I can go through the town passing store after store
Showing things it would please me to own,
But to thrift I am lost; I won't reckon the cost
When I'm left in a toy shop alone.

Another famous poem about toys is “The Toy Strewn House.” Unfortunately, the author is anonymous.

Give me the house where the toys are strewn
Where the dolls are asleep in the chairs
Where the building blocks and the toy balloons
And the soldiers guard the stairs.

Let me step in the house where they tiny cart
With its horses rules the floor
And the rest comes into my weary heart
For I am at home once more.

Give me the house with the toys about
With the battered old train of cars
The box of paints and the books left out
And the ship with her broken spars;


You can find other toy-related poetry on-line. “Toys in a Field” is definitely not light verse or sentimental. Yusef Komunyakaa wrote this poem out of his experience in the Vietnam war. I did not put Komuyakaa’s poem on this blog, because it is not in the public domain. You can read it at http://www.gotpoetry.com/Poems/l_op=Showpoet/Poems/l_op=Showpoems/Poems/l_op=viewpoems/lid=95758.html


Some Other Toy Poems on the Internet:

Robert Service, “Her Toys,” a poem with a theme very much like that of “Little Boy Blue,” http://www.quotesandpoem.com/poems/SelectedPoemByTopic/Service/Children/%20%20%20%20Her%20Toys/286/

The sample poems this month, along with the poems for which links have been provided, show how poems starting with a toy (or toys) can go in a variety of directions. Use your creativity to write your own (more contemporary) toy-related poem. Will you write about toys from your childhood or those your children or grandchildren prefer? Will you be serious or humorous? Your poem may be free or formal verse.

Due to formatting restrictions on the blog, all poems should be left justified. Unfortunately I am unable to publish indentations, shaped poems or even extra spaces between words or phrases.

Poems published in books or on the Internet (including Facebook and other on-line social networks) are not eligible. If your poem has been published in a periodical, please include publication data. Poems submitted after the December 15 deadline will not be considered.

Send your poem to wildamorris[at]ameritech[dot]net (substitute the @ sign for “at” and a . for [dot]. Be sure provide your e-mail address. If you use a form, please specify the form used. Also indicate in your email whether the poem is written for children or for adults. Submission of a poem gives permission for the poem to be posted on the blog if it is a winner, so be sure that you put your name, exactly as you would like it to appear if you do win, at the end of the poem.