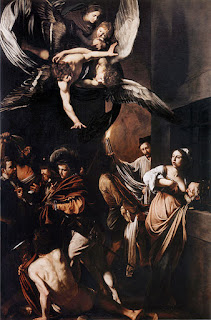 The Seven Works of Mercy by Caravaggio (circa 1607)
In Roman Catholic tradition, the seven acts (or woks) of mercy are
to give drink to the thirsty, food to the hungry and clothing to the naked,
to house the homeless (or pilgrim), bury the dead, and visit the imprisoned and the sick.

Donna Pucciani, judge for the November poetry challenge said there was the clear winner. She described the winning poem, “Home is Where the Love Is,” as follows:

The poem features powerful details but avoids sentimentality. Brevity is the strength of the poem and permits a tight focus on the scene. Allows the reader to feel the emotion, but resists the urge to tell the reader how to feel: lets the sparse but effective detail do the work. There is also a unique sense of global poverty and empathy which sets this poem apart.

I think you will agree.

Home Is Where the Love Is

Mary A. Nelen is a writer and photographer living in New York. She retains ownership of her poem.

About the judge: Donna Pucciani, a Chicago-based writer, has published poetry on four continents in such diverse journals as Poetry Salzburg, Shi Chao Poetry, Journal of the American Medical Association, Gradiva and The Christian Century. Her work has been translated into Italian, Chinese, Japanese and German. In addition to five Pushcart nominations, she has won awards from the Illinois Arts Council, The National Federation of State Poetry Societies and Poetry on the Lake. Her sixth and most recent collection of poems is A Light Dusting of Breath. 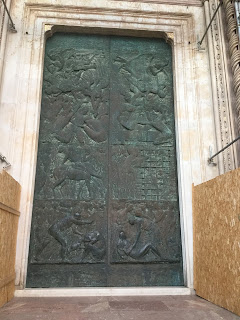 Bronze doors of the Duomo (Cathedral) of Orvieto, Italy
by Emilio Greco, 1970
depicting the Seven Works of Mercy
Photo by Wilda Morris, November 2015

Seven out of 10 Americans are one


paycheck away from being homeless.


During my childhood and youth, I saw no evidences of homelessness in Iowa City. I knew that there were hobos riding the rails, though by the time I would have begun to understand that phenomenon, it was no longer as prevalent as it had been. I have no recollection of homelessness in Washington, D.C. during my four years as a student at American University (1957-61). However, when I went to New York City to participate in a debate tournament, I had an experience that had such a profound impact on me that I wrote a poem about it almost four decades later.

Feet on the Subway

His coat was ragged
as his face. His worn hat
and threadbare gloves
could not protect him
from the icy cold racing
through the wind tunnels
of New York City.
Probably he panhandled
coins to ride the subway.
My eyes were drawn
from his drawn face,
his recessed eyes,
to the skin of his ankles
stretched tight and red,
his puffy feet, pressed
into loafers, the newspaper
stuffing visible through
large holes in the soles.
I shivered less from the cold
than the coldness
with which I stared.
I reached my station,
rose and left the subway car.
I took his feet with me.
Look, the swollen ankles,
the newspaper-stuffed shoes
are still stored
just behind
my eyes.

~ Wilda Morris
Christian Citizen (Volume 1, 2005), p. 7. This poem was also published in Backstreet Quarterly, and in Empty Shoes: An Anthology of Poems on the Hungry and the Homeless, Selected and Edited by Patrick T. Randolph (Elkhorn, Wisconsin: Popcorn Press, 2009). Empty Shoes is available for purchase at http://www.popcornpress.com/product/empty-shoes/.

The National Alliance against Homelessness reported that 578,424 people were homeless in the United States on any given night in January 2014. If those, 216, 197 were members of homeless families; the rest were homeless individuals. About 9 percent of the total were veterans. (See http://www.endhomelessness.org/pages/snapshot_of_homelessness. For information on homeless veterans, see http://www.dvnf.org/veteran-homelessness-facts/?gclid=CIOlmsHv68gCFUo8gQodkZ8NBg).

Homeless children and youth are particularly vulnerable. The U.S. Department of Health and Human Services estimates that each year 5,000 homeless youth are buried in unmarked graves because they are unidentified or their bodies are unclaimed (see http://bphc.hrsa.gov/archive/policiesregulations/policies/pal200110.html. Some homeless youth are homeless with one or more of their parents. Some are runaways, perhaps escaping abusive situations at home. Others are “throwaways,” youth who have been forced from their homes as a result of disputes with parents or guardians.

Some people are chronically homeless. For others, homelessness resulting from a medical crisis, domestic abuse or other circumstance, is temporary. Either way, it is a difficult and dangerous situation in which to live. It is tragic and ironic that there is so much homelessness in one of the wealthiest nations on earth.

Donna Pucciani has written a number of poems about homelessness. Her experiences as a volunteer at a homeless shelter, gives her sensitivity to the humanity and the needs of those who are homeless.

Light streams in, sighs and groans
subside into waking.
Three hundred pounds of sagging flesh,
he grasps the sheet around his waist,
His knees swell like ripe plums.
“Ma’am, can you help me dress? I can’t bend.”

The socks, white cotton,
have leathered into brown,
still stiff from yesterday’s streets.
“Sorry, not too clean,” the rough whisper.

Later, sitting outside like Buddha,
he coughs chested roars,
bloody and spent,
that rend the reddening sky,
spits his shattered lungs
into the flower beds.

His fleshy, piglike face is earthly matter,
like hers, but she can see his obsese body,
white-clad in a seamless robe,
handing out bread on a mountain,
blessing fish with fat, purpled hands.

He sweats holy water,
sending stench like incense
rising above a church basement
carpeted in saints.

Donna Pucciani, a Chicago-based writer, has published poetry on four continents in such diverse journals as Poetry Salzburg, Shi Chao Poetry, Journal of the American Medical Association, Gradiva and The Christian Century. Her work has been translated into Italian, Chinese, Japanese and German. In addition to five Pushcart nominations, she has won awards from the Illinois Arts Council, The National Federation of State Poetry Societies and Poetry on the Lake. Her sixth and most recent collection of poems is A Light Dusting of Breath.

November Challenge – A Poem about Homelessness

The Challenge for November is to write a poem about homelessness. It can be about homelessness somewhere in the U.S. or anywhere else in the world. Most of the best poems on the subject reflect personal experience of someone who is or has been homeless, or who has had some contact with homeless people. Be creative. Be respectful of those who are homeless.

The deadline is November 15. Poems submitted after the November 15 deadline will not be considered. There is no charge to enter, so there are no monetary rewards; however winners are published on this blog. Please don’t stray too far from “family-friendly” language. No simultaneous submissions, please. You will know by the end of the month whether or not your poem will be published on this blog. Your poem may be free or formal verse. If you use a form, please specify the form when you submit. Decision of the judge or judges is final.

Poems on the Internet (including Facebook and other on-line social networks) are not eligible. If your poem has been published in a print periodical, you may submit it if you retain copyright, but please include publication data.