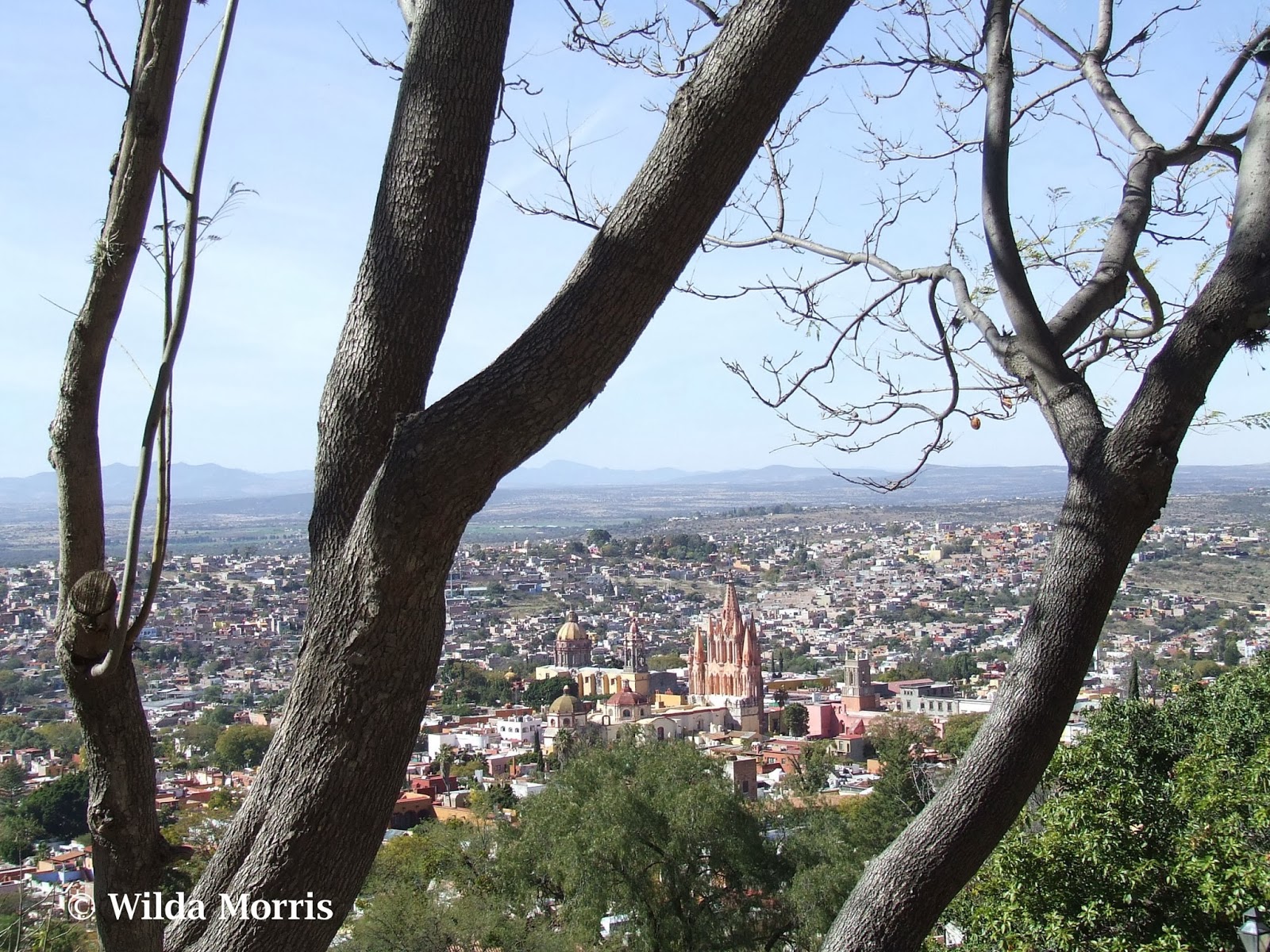 From El Mirrador (the outlook) above San Miguel de Allende, GTO, Mexico, you can look down on the city and see its most iconic structure: La Parroquia de San Miguel Arcangel It has been called a "cotton candy church" by some, perhaps because it takes on soft colors in certain light. If you sit in El Jardin, the plaza on which it is located, it looks like a Gothic cathedral, but it a parish church, is not a cathedral. And only the façade is Gothic. The church was built in the 17th century, but in the 1880s, it was decided that a new façade was needed. An indigenous architect, Zeferino Gutierrez, was hired to head the project. It is said that he was shown postcard pictures of European cathedrals. Either he was enamored of them and decided he wanted to create a church that looked Gothic, or he was instructed to do so (stories differ). Whatever actually happened, he designed the front of one of the best-loved and most-photographed churches in Mexico - the most iconic structure of San Miguel de Allende.

There are many iconic structures in the world which have inspired poets in the past, and can still serve as inspiration for poets in our day. Yet there were fewer entries in the January challenge than is usually the case, and the judges determined that none was a winner. So if you didn't find time to enter the challenge by the January 15 deadline, you have a second chance. Or if you entered but your poem didn't win, you can revise it and try again.

Stun me with your poem about a building that is iconic: the leaning tower of Piza, the opera house in Sydney, the Petronas Towers in Kuala Lumpur, St. Basil's Cathedral in Moscow, the Hagia Sofia in Istanbul, Burj Khalifa in Dubai - or an iconic building closer to home. The challenge will be left open until a winner is declared. Follow the direction in the previous post, except for the deadline.

A new challenge will be posted on February 1. Good luck! 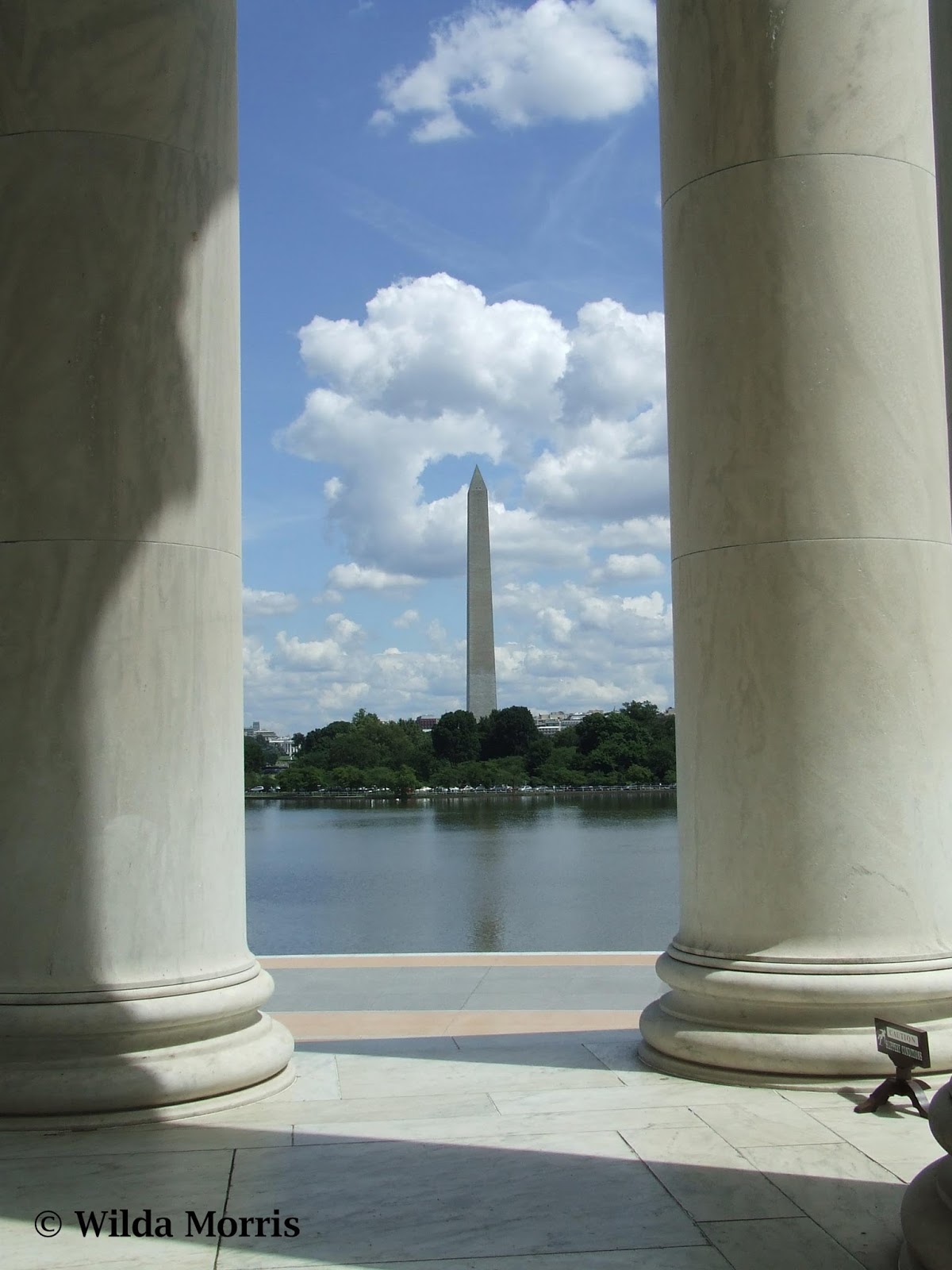 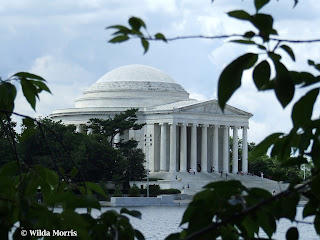 I recently reread “The New Colossus” by Emma Lazarus. Lazarus read her sonnet at the dedication of the Statue of Liberty in 1886. The statue was a gift from the French people to the US, in celebration of the 100th anniversary of American independence. I consider it an iconic structure because it is immediately recognizable by people all over the US and around the world. Here is the poem:

Not like the brazen giant of Greek fame
With conquering limbs astride from land to land;
Here at our sea-washed, sunset gates shall stand
A mighty woman with a torch, whose flame
Is the imprisoned lightning, and her name
Mother of Exiles.  From her beacon-hand
Glows world-wide welcome; her mild eyes command
The air-bridged harbor that twin cities frame,
"Keep, ancient lands, your storied pomp!" cries she
With silent lips.  "Give me your tired, your poor,
Your huddled masses yearning to breathe free,
The wretched refuse of your teeming shore,
Send these, the homeless, tempest-tossed to me,
I lift my lamp beside the golden door!"

There are many other iconic structures around the world. I went on-line, looking for poems about some of them. Here are links a few that I found.

The Pyramid at Giza - http://allpoetry.com/poem/2062105-The-Great-Pyramid-of-Giza-by-ghostofdawn

Other iconic structures include the Kaaba at Mecca; The Dome of the Rock in Jerusalem; Buckingham Palace in London; the Alhambra Palace in Granada, Spain; the Lincoln and Jefferson Memorials and the Washington Monument in Washington, D.C.; the Taj Mahal in Agra, The Needle in Seattle, Washington; and the Willis Tower (formerly the Sears Tower) in Chicago; the Empire State Building in New York City; St. Peters in the Vatican; the Coliseum in Rome; and St. Mark’s in Venice.

Sir John Betjeman’s poem “In Westminster Abbey” is not about the Abbey. Rather it a satirical commentary on the behavior and attitudes of an upper class British woman who attends a worship service in Westminster Abbey—another iconic structure—during World War II. You can find that poem here: http://allpoetry.com/poem/8493441-In-Westminster-Abbey-by-Sir-John-Betjeman.

The January Challenge is to write a poem about an iconic structure. It can actually be about the structure, or it could be about something that happened in (or on) such a structure (such as Betjeman’s poem). For purposes of this challenge, a park, plaza, or square is NOT considered an “iconic structure.” Nor are sculptures such as the faces on Mount Rushmore.

Submit only one poem. Your poem can be free or formal verse. If you submit a form poem, please specify the form. The deadline is January 15. Poems submitted after the January 15 deadline will not be considered. There is no charge to enter, so there are no monetary rewards, but winners are published on this blog.