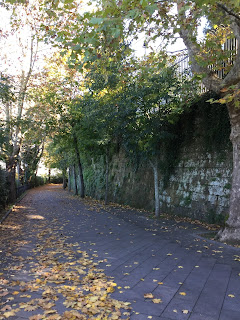 Wall at the Edge of Orvieto, Umbria, Italy
© Wilda Morris


I had expected a good response to the call for wall poems this month. To my surprise, there were fewer submissions than usual. Considering the heated discussion concerning the president’s plan to build a large wall on the border between the U.S. and Mexico, I really thought I would get a lot more political poems than I did.

The winning poem, however, has a different take. It is an etheree by Michael Escoubas.

was
never
in Berlin
or in China
or even along
the Mexico border
no my friends the highest fence
extends within our stubborn pride
higher than Mount Kilimanjaro --
I was wrong to hurt you, please forgive me

Escoubas retains copyright on this poem.

Bio:
Michael Escoubas began writing poetry for publication in August of 2013, after retiring from a 48-year-career in the printing industry. Early in life his mother said, You have a gift for words; you should do something with that gift. He writes poetry, in part, because of his mother’s encouraging words. Michael also writes poetry because he believes poetry brings people together and that poets are menders of broken things. Michael has published one chapbook, Light Comes Softly, which is available as a free download on iTunes.