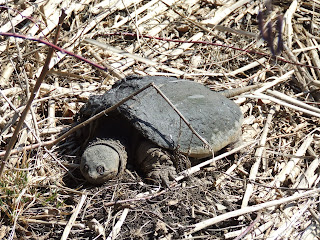 Estella Lauter judged the turtle poems. She said that three of the poems kept calling her back; those poems received first, second and third place. She also awarded an honorable mention to the following poem:

I parked near the
fishing pier
and walked back,
taking my time.

I found the cattails,
hunted
for the half-submerged
log.

Do you remember
the day we came
upon it?
A whole
row of turtles
there
sunning themselves.

About this poem, the judge said, “Even though I do not know this place, the poem works as a charming expression of how we return to places we have shared with a loved one to confirm what we saw and felt at other stages of our lives and to help each other to recall those experiences. It is an elegant poem.”
Lauter awarded third place to this poem:

In The Blink of an Eye

“This poem stays with me," reported Lauter, "because of its arc of experience. The first stanza describes a scene in language that matches the attitude of longing for beauty and peace, while the second describes an (unexpected?) element that becomes apparent, and the third acknowledges the poet's consciousness that s/he has just imposed his/her own anthropomorphic perspective on the second scene, and s/he has the self-deprecating grace to see that the turtle's blink may tell another story. I love the word "giggled" in the penultimate line. It allows the turtle to speak in addition to blinking.”

Winter killed affection like a blade:
Cut out the day from night, the warmth from cold,
My life from death, and left me with the shade,
The ice, the dead, and all the mist and mold.
In spring the months were here yet never here:
The thaw, the rain, the flowers, all had their day,
But I was living in another sphere
Where things are seen yet stay a glass away.
The days are numbered now into July:
The wear of winter is in full repair
And summer gives my soul, in halves, supply—
We’re getting there, like tortoise and the hare—
The intellect has raced all lean and small,
But oh, my turtle heart, it has to crawl.

Comments from the judge: “Marilyn Taylor has taught me to appreciate the power of the sonnet to contain and express strong emotions, such as grief, that are otherwise difficult to convey without going overboard, and this is a well-crafted sonnet that does exactly that good work. I love the use of the folk tale and the turtle as metaphor for the slowly recovering heart.

The first place poem comes at the turtle from a different angle:

Today I came across a painted turtle
as I was bicycling near a shipping canal.
He had stopped in the middle of the trail,
head erect, all limbs exposed, waiting.

He seemed stuck in the moment, moving
neither forward nor backward, trapped in time.

I thought of you, dear father, moving across
unstable ground, gripping your cane
and hovering for a brief moment

before the storms set in.

Estella Lauter wrote, “Here the poet uses free verse effectively to convey both the story of coming across a turtle as it crosses the trail and the moment of insight when the turtle's predicament merges with that of her aging father, and then to convey the additional insight that all three are "crossing" before the inevitable storm. For a small poem, it carries a world view: we (both animal and human beings) are perhaps always somewhat handicapped (by circumstance, ability, age in this vignette) in our processes of crossing, but there is at least the possibility that we will make it "before the storms" (which I take to be the inevitability of death).

Congratulations to the three winning poets. A new challenge will be posted on November 1. Maybe you will be the next winner!

Poets retain copyright on their own poems.

Caroline Johnson has two poetry chapbooks, Where the Street Ends and My Mother’s Artwork, and more than 50 poems in print.  A Pushcart Prize nominee, she won the Chicago Tribune’s Printers Row 2012 Poetry Contest. Her short stories have been published in Rambunctious Review, Origins Journal, Naugatuck River Review, Blast Furnace, The Chicago Tribune, New Scriptor, among others.  She is president of Poets and Patrons of Chicago and teaches community college English.  See her blog at http://jupiter-caroline.blogspot.com/.

Robert Klein Engler lives in Omaha, Nebraska and sometimes New Orleans. Many of Robert’s poems, stories, and paintings are set in the Crescent City. His long poem, “The Accomplishment of Metaphor and the Necessity of Suffering,” set partially in New Orleans, is published by Headwaters Press, Medusa, New York, 2004. He has received an Illinois Arts Council award for his "Three Poems for Kabbalah." Link with him at Facebook.com to see examples of his recent work. Some of Mr. Engler’s books are available at amazon.com. He is represented by Connect Gallery at 3901 Leavenworth St, Omaha, NE 68105.

Pamela Larson lives in Arlington Heights, IL. Pam has been published in the Daily Herald, Karitos, Cram Poetry Series, Journal of Modern Poetry, bottle rockets haiku journal, East on Central and on PoetrySuperHighway.com and DagdaPublishing.com. She has won awards and contests and has a Pushcart Prize Nomination.

Estella Lauter was appointed 2013-2015 Poet Laureate of Door County, Wisconsin. She retired in 2004, from teaching in the University of Wisconsin system. She leads poetry classes in the winter program at The Clearing in Ellison Bay, Wisconsin. Her published works include The Essential Rudder: North Channel Poems, Pressing a Life Together by Hand and Transfigurations: Re-imagining Remedios Varo.