November Poetry Challenge - The Winning "What If" Poem 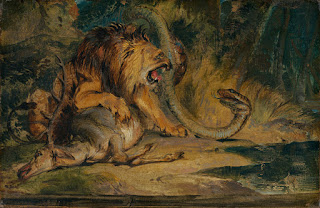 
Congratulations to Michael Escoubas, who submitted an unusual poem to the November Poetry Challenge. He took  the “what if” prompt in a very different way than did others who submitted their work.

Bloody Paws
The young lions roar for their prey
and seek their food from God.
~ Psalm 104.21 (Holman Christian Standard Bible)

I’m struck by the young lions
who seek their food from God.
Has God wired creatures to know
or seek Him? I think of wisdom
that resides in God exceeding
anything imaginable.

What if God took me by the hand
and opened such secrets? What if
I were given a glimpse of God
at work on the lion’s instincts
of stealth and smell and sounds
as he jumps his prey without
so much as a what if of doubt
or after-thought of despair.

The young lion lives his life, seeks
his prey, stands with bloody paws
on the gazelle’s still warm carcass,
then roars his prayer of thanks.
What if I could go through life
without forethought of grief or regret?

Bio: Michael Escoubas began writing poetry for publication in August of 2013, after retiring from a 48-year-career in the printing industry. Early in life his mother said, “You have a gift for words; you should do something with that gift.” He writes poetry, in part, because of his mother’s encouragement. Michael also writes poetry because he believes poetry brings people together and that poets are menders of broken things. Michael has published one chapbook, Light Comes Softly, which is available by contacting the author.

Perhaps among North Americans the best known “What if” poem is “Whatif” by Shel Silverstein. You can read it at http://www.famouspoetsandpoems.com/poets/shel_silverstein/poems/14819. It was written for school-age children and reflects many of their fears. A child who has friends whose parents’ marriage has fallen apart, may worry about whether his or her own parents will get divorced. What, the student may wonder, if I’m late for school, or fail the math quiz? Silverstein did a good job of summing up the concerns of these young people in his poem. Perhaps the most poignant – and prevalent – “what if” among Silverstein’s readers is “What if nobody likes me?”

Samuel Taylor Coleridge’s “what if” poem may or may not have inspired Silverstein. Coleridge’s “What if You Slept” has an entirely different atmosphere: He did not gather concerns or fears into his poem. Rather he used his imagination to devise a magical situation.

What if You Slept?

This poem is I the public domain.

As you have doubtless figured out by not, the November Challenge is to write a “What if” poem. Your poem can be as imaginative as Coleridge’s, or you can use Shel Silverstein’s poem as your prompt.

Title your poem unless it is haiku or another form that does not use titles. It may be free or formal verse. If you use a form, please identify the form when you submit your poem. Please single-space, and don’t use lines that are overly long (because the blog format doesn’t accommodate long lines).

You may submit a published poem if you retain copyright, but please include publication data. This applies to poems published in books, journals, newspapers, or on the Internet.

The deadline is November 15. Poems submitted after the deadline will not be considered. There is no charge to enter, so there are no monetary rewards; however winners are published on this blog. Please don’t stray too far from “family-friendly” language. No simultaneous submissions, please. You should know by the end of the month whether or not your poem will be published on this blog. Decision of the judge or judges is final.

Send one poem only to wildamorris[at]ameritech[dot]net (substitute the @ sign for “at” and a . for “dot”) . Include a brief bio which can be printed with your poem, if you are a winner this month. Please put your name and bio under the poem in your email. Put “What if poem in the subject line.

Submission of a poem gives permission for the poem to be posted on the blog if it is a winner, so be sure that you put your name (exactly as you would like it to appear if you do win) at the end of the poem. Poems may be pasted into an email or sent as an attachment (no pdf files, please). Please do not indent the poem or center it on the page. It helps if you submit the poem in the format used on the blog (Title and poem left-justified; title in bold (not all in capital letters); your name at the bottom of the poem). Also, please do not use spaces instead of commas in the middle of lines. I have no problem with poets using that technique (I sometimes do it myself). However I have difficulty getting the blog to accept and maintain extra spaces.