There is always some subjectivity in judging poetry. Sharon Auberle read the crow poems submitted this month, and said she thought the best one was “Crow Gang.” Bruce Dethlefsen thought the best of the bunch was “Ghazal of the Crow.” So we have two winners this month. Here they are.

On our forty, crows belong to a gang.
They hang together, fan out in the
morning to do assignments.
Fearless during the day,
at night gather for protection,
one to stay awake and watch.
Instantly know the newest road kill,
spread the word,
always first at the scene.
>
Share only with eagles,
understand power.

Members have no pity—eyes cold.
Swagger when they walk,
rarely move over for you to drive by.
Eat baby birds or anything
defenseless, rob nests of eggs,
clean up leftovers,
have no respect for boundaries.

Take care of their own,
hold secret trials,
dole out punishments.
Don't need your opinion on matters.
Been around the block
once or twice.
Their uniforms are black and stark,
their motto, "Crows Rule."

Peggy Trojan and her husband retired from teaching to seventy acres of woods in northern Wisconsin, where they built their own house next to a little trout stream.  She published her first poem when she was seventy-seven, finding time, finally, to write.  Currently working on two chapbooks, one a collection of poems about her large family, and the other a collection of childhood memories of World War II.  She is a member of Wisconsin Fellowship of Poets.

Ghazal of Ur the Crow

You can find Karla Linn Merrifield on the internet at the following sites:

Poets retrain copyright on their poems.

The new challenge will be posted on May 1. Maybe you will be the winner next month. 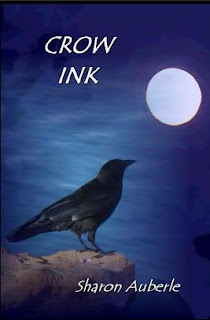 "If men had wings and bore black feathers, few of them would be clever enough to be crows." This was the view of Henry Ward Beecher, a prominent speaker, social reformer and preacher of the last half of the 1800s. Recent scientific study has verified Beecher’s underlying point—that crows are quite intelligent.

Crows also tend to be noisy, which has won them the disapproval of many people.

Around 1999, West Nile Virus decimated the population of crows in the United States. I’m happy that the crows, as a species, have recovered and are back in our yards and fields, ready to provide a poetry prompt. Here are two examples of crow poems:

Crows know.
They take their black,
raucous selves,
fire up that attitude
and never look back
at their abandoned nest
high in the pines.

I wonder, sometimes,
if our lives might be no more
than the art of crows
written, for a while
on the sky
then, in an instant,
erased by the wind…

In this poem, the crow is not an omen of good or ill. Rather the poet wonders about the aptness of the crow’s life as a metaphor for our human lives. She seems to be asking if we humans are worth more or make more of a dent on the world than the crow whose “art” is “written” on the sky, but soon erased

You can learn about Sharon Auberle at her website, http://sharonauberle.blogspot.com. For information on how to purchase a copy of Crow Ink, see http://lileaglecrowink.blogspot.com/.

At the beginning of the following poem, the poet doesn’t seem to have anything to wonder about regarding crows. He knows all he needs to know.

they live forever
have you ever seen a dead one?

Dethlefsen riff’s off the ways crows are sometimes used in the folklore as an omen that something bad is about to occur, as well as the common association of crows with death. This becomes, in my reading, a metaphor for the human tendency of humans to scapegoat. Dethlefsen takes suspicion of crows to an extreme. By doing this, he turns a critical light on human suspicions of the “out group” without having to be preachy.

The common phrase, “mate for life,” seems to apply to most crows, unless they are unsuccessful in breeding, or one of the pair dies.  The title, however, says, “Crows Mate for Death.” That fits with the view of crows in the poem, and set up an interesting wordplay with the last line, “crows are made for death.”

Burde Dethlefsen was the 2011-2012 Poet Laureate of Wisconsin. You can learn more about him and his poetry at http://brucedethlefsen.com/. You can order Unexpected Shiny Things at http://cowfeatherpress.org/books.html.

Here are some links to poems about crows on the Internet:
*Robert Frost, “Dust of Snow” - http://www.poetryfoundation.org/poem/173526
*Cornelius Eady, “Crows in a Strong Wind” from Victims of the Latest Dance Craze - http://www.poetryfoundation.org/poem/177990
*Ted Hughes, several poems from his book of mythic poems, Crow: From the Life and Songs of the Crow - http://www.thebeckoning.com/poetry/hughes/hughes2.html
* John Ciardi, “About Crows,” http://spirituallythinking.blogspot.com/2011/10/about-crows-by-john-ciardi.html
*Joni Mitchell, “Black Crow” (song lyrics) - http://www.poemhunter.com/song/black-crow/

M. J. Iuppa has a chapbook entitled, “As the Crow Flys.”( http://www.mjiuppa.com/books.html)
with crows as its central image. Recommended by Karla Linn Merrifield.

April is National Poetry Month - a good month to try your had at the poetry challenge. Whether you do that or not, I encourage you to read a lot of poetry this month, and share some poems you like with others. If you don't write a crow poem, write one about whatever you want to write about (just for yourself, not to submit to this poetry challenge). Writing poetry can be therapeutic and liberating.

Read about, think about, or best of all, go outdoors and spend time with crows. Write a poem in which crows play an important row. They may just be themselves, crows in the natural world. Or they may be may be metaphors.

Your poem can be free verse or formal. If formal, please specify the form. Please submit only one poem during any particular month.

The deadline is midnight Central Standard Time is April 15. Poems submitted after the April 15 deadline will not be considered.

Due to formatting difficulties, I prefer that poems be left justified and not have indentations or spaces in the middle of lines.

Send your poem to wildamorris[at]ameritech[dot]net (substitute the @ sign for “at” and a . for [dot]. Be sure provide your e-mail address. When you submit your poem, add a note indicating where you took poetic license with the facts of your life. The poem should be in first person, as if it actually happened to the speaker in the poem. Submission of a poem gives permission for the poem to be posted on the blog if it is a winner, so be sure that you put your name, exactly as you would like it to appear if you do win, at the end of the poem.