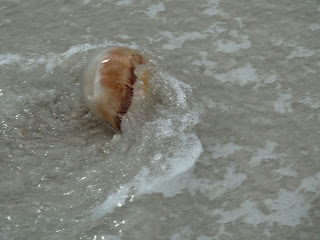 The cannonball jellyfish
swept ashore
on that stretch of chiseled
shore, clustered shell—
I took photographs,
each vulnerable
angle tempted me more
than the last.

The gelatinous glob,
bell, mucus, oral arms,
dying, a mole
on the sand’s silky flesh—
until the insides evaporate,
until gulls fly in to poke,

I need no photographs
to view nor recordings

of the ocean’s quelling waves

to rouse in me that scene
that few but nature

Gail Goepfert is a Midwest teacher, poet, and nature photographer.  She is published in a number of anthologies and journals including Avocet, Off Channel, After Hours, Caesura, Florida English, Poetic License Press, Examined Life Journal and online at Brevity Poetry Review, Emerge Literary Journal, Blue Hour Magazine and Bolts of Silk.  Two of her poems rode a PACE bus in a Highland Park, Illinois, annual Poetry That Moves contest, and she was a runner-up for Journal of Modern Poetry and Mississippi Valley Poetry Contest. Currently, she serves as an associate editor for Chicago-based Rhino.

Thank you to thee judge for July, Judy Kolosso. She was the 2012 winner of the Wisconsin Writers' Jade Ring for poetry and is co-editor of the Wisconsin Poets' Calendar 2014. Her most recent publication is in the premiere issue of Midwest Prairie Review. She has published two collections of poetry, Aubade, and In the First Place. 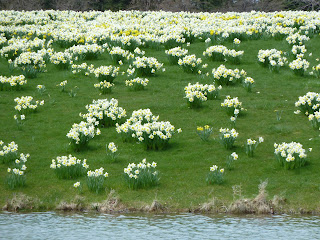 Continuous as the stars that shine
And twinkle on the Milky Way,
They stretched in never-ending line
Along the margin of a bay:
Ten thousand saw I at a glance,
Tossing their heads in sprightly dance.

The waves beside them danced, but they
Out-did the sparkling waves in glee:
A Poet could not but be gay,
In such a jocund company:
I gazed—and gazed—but little thought
What wealth the show to me had brought:

I have loved this poem since I first heard it read. Perhaps you feel the same way. “Daffodils” is one of the most famous and best loved poems in the English language.

Wordsworth’s poetic art is evident. He begins with a simile: “I wandered lonely as a cloud.” The idea of a cloud being lonely is personification, but the simile might be said to be the opposite—the human speaker is like an object of nature. Later in the poem, the daffodils outdo the waves in “glee”—a statement that personifies both flowers and the water.

Another interesting aspect of the poem is that, while the speaker is like a cloud in the sky in stanza one, the daffodils are like stars in the sky in the second stanza. Stanza two was not in the first draft, which you can read at https://wordsworth.org.uk/daffodils.html.

The water is mentioned in each of the first three stanzas (“lake” in stanza 1; “bay” in stanza 2; “waves” in stanza 3). That the water is absent from the final stanza is symbolic of the superior contribution of the flowers—it is the daffodils that come forcefully to mind later.

If the first draft, the color of the daffodils (“golden”) was not mentioned. It adds a lot to the visual effect of the poem. What seems to have had the greatest impact on the poet, in addition to the vast number of daffodils encountered, is their movement. Note that each stanza includes a form of the word “dance.” This word provides a more intensely pleasant mood to the poem than if Wordsworth had just said the daffodils “swayed” in the breeze.

Wordsworth has used poetic license in saying he “wandered lonely as a cloud,” at least if scholars are correct in thinking the poem, written in 1804, was inspired by a walk he took two years earlier with his sister Dorothy. You can read Dorothy’s journal entry here:
https://wordsworth.org.uk/dorothyjournal.html.

“Daffodils” is a formal poem, as you doubtless noticed, with regular iambic meter and six-line stanzas. The rhyme scheme is ABABCC.

A century or so later, Helen Hunt Jackson, wrote a poem about an experience while she was visiting Italy:

Poppies in the Wheat

Along Ancona's hills the shimmering heat,
A tropic tide of air with ebb and flow
Bathes all the fields of wheat until they glow
Like flashing seas of green, which toss and beat
Around the vines. The poppies lithe and fleet
Seem running, fiery torchmen, to and fro
To mark the shore.
The farmer does not know
That they are there. He walks with heavy feet,
Counting the bread and wine by autumn's gain,
But I,--I smile to think that days remain
Perhaps to me in which, though bread be sweet
No more, and red wine warm my blood in vain,
I shall be glad remembering how the fleet,
Lithe poppies ran like torchmen with the wheat.

This is, I think, an excellent poem, though not as good as Wordsworth’s. “Poppies on the Wheat” is a sonnet with the rhyme scheme ABBAABBACCACAA.

Jackson repeats the simile of poppies running like torchmen. The narrator of the poem believes the farmer is interested in the value of his wheat (and grapes) and is inattentive to the beauty of the flowers. She, on the other hand, is putting those poppies in her memory bank so she can enjoy them even after she has lost the ability to enjoy bread and wine.

While Wordsworth suggests that he did not fully value the daffodil dance when he saw it, he came to recognize how much it enriched his life because of his flashbacks to that experience. In Jackson’s poem, on the other hand, the speaker is enjoying the beauty of the flowers and already anticipating that they will come to mind again and again.

The theme of recollection appeals to me because I have experienced it. I remember driving in Illinois and “seeing” from the corner of my eye against a pink sunset the pyramid at Sakara. The sky looked just like the sky behind that pyramid as my tour bus some months earlier had driven past. Momentarily I was transported back to Egypt, as the pyramid flashed on my “inward eye.”

Note:The poems above are both in the public domain.

The challenge for July is to write a poem about remembering something you have seen, and how it impacts you later. It may an experience with nature, as in Wordsworth’s and Jackson’s poems. Or it may be something more like the pyramid at Sakara. For purposes of this challenge, write about a “thing” and not about remembering a person.

Your poem can be free verse or formal. If formal, please specify the form. Poems of 40 or fewer lines are preferred. Due to formatting difficulties, please submit poems that can be left justified and that do not have indentations or spaces in the middle of lines.

Please submit only one poem during any particular month.

The deadline is July 15. Poems submitted after the July 15 deadline will not be considered.

Copyright on poems are retained by the poets.

Send your poem to wildamorris[at]ameritech[dot]net (substitute the @ sign for“at” and a . for [dot]. Be sure provide your e-mail address. When you submit your poem, add a note indicating where you took poetic license with the facts of your life (as Wordsworth evidently did). The poem should be in first person, as if it actually happened to the speaker in the poem. Submission of a poem gives permission for the poem to be posted on the blog if it is a winner, so be sure that you put your name, exactly as you would like it to appear if you do win, at the end of the poem. Poems may be pasted into an email or sent as an attachment. Please do not indent the poem or center it on the page.