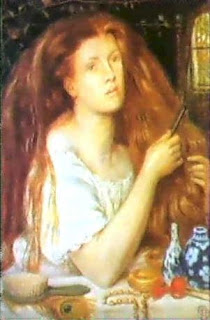 
As the painting by Rossetti suggests, the use of makeup has a long history. The comb is not the woman's only beauty aid.

William Marr, who judged the September Poetry Challenge, selected two poems as winners. Here they are:

I paint my face,
coloring lips to shine and dare,
to tempt or look like fresh magazine girls.
I choose foundation in a bottle,
a shade matching my best patches
to hide certain blemishes.
Brows brushed with acceptable brown
brightens fading eyes.

You paint your face
in charming grins
to hide the flaws beneath your skin.
Your expressions of blank stares
repress reactions deep inside.
Your face is painted without paint,
to cover up what’s in your heart.
Making up our faces
seems a necessary art.


What the judge especially liked about this poem is the contrast between two kind of “makeup” - “one is artificial with paint and the other is natural without paint.”

Marr described this as “a concise yet vivid poem which captures the image of natural beauty in front of an artificial being.”

Poets published on this blog retain the right to republish their poems elsewhere.

Marilyn Peretti, of Glen Ellyn, Illinois, has publishing credits at NewVerseNews.com, Fox Cry Review, Talking River, Journal of Modern Poetry, Kyoto Journal, Tipton Poetry Review, Prairie Light Review, and others. She has been nominated for Pushcart Poetry Prize, and awarded other prizes. Among her books are Let Wings Take You, Lichen-Poems of Nature, and Angel's Wings, some found at www.blurb.com/bookstore. You can read more of her poems at https://perettipoems.wordpress.com/, and see some of her artwork at http://www.pagesbyperetti.com/.

William Marr was born educated in Taiwan. He came to the United States for graduate school in 1961. In 1966 he retired from his engineering position at Argonne National Laboratory to devote himself to his true passion -- art and poetry. He has published 19 volumes of poetry in Chinese under the pen name Fei Ma, and several books of translations of contemporary American and European poetry. His first book of poems in English, Autumn Window, published by Arbor Hill Press in 1995 (with second edition in 1996) was greeted with critical acclaim and he was hailed as one of the collectible Chicago poets. His second book of poetry in English, Between Heaven and Earth, was published by PublishAmerica in 2010. His poems appear in over one hundred anthologies and are included in high school and college textbooks of Chinese Literature in Taiwan and Mainland China. Some of his poems have been translated into Japanese, Korean, Malaysian, Hebrew, Indian, Spanish, German, Slavic and Romanian. His most recent book, Sérénade de Chicago (Ėditions Instutitut Culturel de Solenzara, 2015), presents his work in Chinese, French and English. He has also edited and published several anthologies of Chinese and Taiwanese modern poetry. You can read more about Dr. Marr, view his artwork, and read some of his poems at http://feima.yidian.org/.