The winning poem for August is by Caroline Johnson, who says her hero is her sister Debbie, who died of osteogenic sarcoma. After her poem was selected, I asked her to explain in more detail why she considered her sister her hero. Here is what she wrote:

I admired my sister Debbie for many reasons. She had a talent of playing the piano, she was the first in the family to have a boyfriend, and she even smoked out on our front porch once with her friends--with my parents watching! However, the biggest reason I admired her was for her fortitude and strength when facing her illness, osteogenic sarcoma, or bone cancer. This cancer caused her to have her leg amputated, and later on, it metastasized to her lungs. It was the same kind of cancer that Ted Kennedy's son had. She even wrote a letter to him, and he replied, telling her to "never give up." He would survive the tragedy, while she didn't

She would tell my mom not to worry about what kind of casket to choose, while my mom couldn't hold back the tears. Debbie accepted her death in the same way she accepted her life; she reacted calmly with the cards that were dealt to her. Though her death at 15 affected us all greatly, it was really the memory of her life--the way she lived her life--that would chase us for years afterwards, like a ghost.


Her is Caroline’s tribute to her sister:

I remember when she lost it.
The memory is almost as vivid
as when she played with Barbie,
holding it with both hands,
moving it here and there
admiring the doll’s long hair.

All those months of chemotherapy,
the nausea, and then, suddenly,
she had beautiful, silky locks.
It was a dark wig, of course,
that I saw my 14-year-old sister comb.
At night it would sit on a Styrofoam head, propped.

She wore the wig and her prosthesis
every school day while climbing the steps
of a crowded yellow bus,
using crutches or sometimes
a cane.

The last time I saw her
we each put a single red rose
on her casket.
Father said he hoped he’d see her again.

Mother, like me, said nothing,
her dyed blonde hair
whipping in the wind.

Copyright to this poem belongs to the author.

Students in Mapua School in New Zealand accepted the July challenge and wrote night poems, which their teacher, Struan McKenzie, submitted for them. The children, who are in year 3, are 6 and 7 years old. They all did a fine job. With some difficulty, I have selected three of their poems as winners to publish. Congratulations to these young poets—and to the entire class! Keep writing!

Night is a black mist.
Floating around the house.
It's creeping up to me.
Oh no! A ghost is coming and the owls are howling
and the leaves are blowing in the trees.
Morning.
I'm glad the night is over.

I love night- By Eden

Every kid at night blows their candle out.
It goes dark.
You snuggle up to your blanket.
You hear funny sounds (hoo, hoo) goes an owl.
(scratch, scratch) goes a black cat.
Fall asleep.
(I love night!)

The night is a black blankey with lots of holes
The wind outside sounds like a owl howling
The smell of night is some crispy fish and chips
The feel of night is a big icecube melting in the sun.

Don't forget to enter the August Challenge! Who is your hero?? 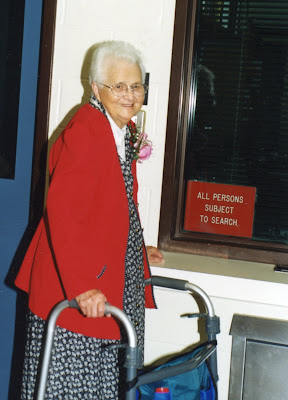 Most of us have heroes. Not movie stars or ball players who make a living from the sport, but real heroes. People whom we admire and respect and would like, in someway to emulate. People who have given large parts of their lives to help others. Some are heroes from the past, people we studied about in school, church, synagogue, temple or mosque. Some are more contemporary heroes.

One of my heroes is my own mother, Woodye Kessler. When my grandmother was a patient in Mercy Hospital, nearing death, Sister Rosemary McManus began regular visits to converse and pray with my grandmother, and with Mother who kept vigil in my grandmother's hospital room. Sister Rosemary was getting ready to begin a new jail ministry, and asked Mother (a Baptist) to consider joining her in that endeavor. Mother was very reluctant. Sister Rosemary kept asking, even after my grandmother’s death. Mother finally agreed to give it a try, because she felt indebted to the persistent nun. The picture above shows Mother outside the jail on the day the sheriff and jail staff honored her for her years of service. Here is the poem I wrote about my mother and her ministry. It is pretty close to the actual facts, as Mother told them.


Woodye Kessler at the County Jail

She tried to hold fear
in her hands but it spread
like melted butter
from her white hair
to the soles of her arthritic feet.
Even the Bible she carried
trembled as the sheriff
locked her in with Sister Rosemary
and a dozen inmates.

She shuddered when Eddie
opened his vile mouth,
cursing her, Sister Rosemary,
God and his cellmate.
But she came again each week,
studying scripture with the men,
sitting as close as she could
to the locked door,
as if it might provide escape,

till the day Eddie asked,
Why do you come here?
Without thinking, she replied,
Because I love you.
At that moment her fear
took flight and she knew
she did love him, knew
he was a child of God

and Eddie began a long journey
back toward the self
he’d abandoned in the pain
of abuse, disrespect,
dehumanization.


Woodye Kessler continued in this jail ministry for at least 27 years. When Sister Rosemary retired and returned to Chicago, she turned the ministry over to Woodye. As long as her health allowed, Woodye also corresponded with persons incarcerated in several states. An inmate from the county jail would be convicted and sent to prison. He and Mother (Woodye) would correspond. Then one day, he would write, "my cellmate (or someone down the way) never gets any mail. He would appreciate it if you would write to him." So she would begin a new correspondence. For a long time, she wrote as many as 100 letters a month to lonely men and women who had lost their way in life and needed a friend. She also visited inmates in penitentiaries in several states.

Woodye Kessler is my hero because she was willing to undertake a challenge which frightened her, but through which she felt she could do good for others. She touched many lives and helped many people (mostly men, since there were not many women in the county jail while she volunteered there). The sheriffs under whose supervision she worked, as well as the chaplain of the state penitentiary, testified that she helped many of these men turn their lives around. (I should say, too, that Sister Rosemary McManus, a gentle, loving woman with a great sense of humor, is also one of my heroes.)

Two of my poems about heroes whose lifetimes overlapped with mine, are included in the current issue of Voices on the Wind. The poem at http://www.voicesonthewind.net/thistime.html honors Dietrich Bonhoeffer and Rabbi Abraham Heschel. Bonhoeffer was a protestant pastor in Germany who opposed the Nazi regime, and ultimately lost his life as a result. Heschel was a rabbi known as a great teacher and as a deeply spiritual man. Yet he stepped out of his classroom and his comfort zone to participate with Martin Luther King, Jr., in the march to Selma, because he felt called to act for racial justice.

Also on the same website, at http://www.voicesonthewind.net/yearsmiles.html, is my poem, “Years, Miles,” about another of my heroes, one who is still living. Aung San Suu Kyi is the leader of the pro-democracy movement in Myanmar (formerly called Burma). Her husband, who was of British background, was in London. He was diagnosed with cancer and given a limited time to live. The government of Myanmar would not allow him to go see his wife one last time. She might have been able to join him in Great Britain, but would not have been allowed to return to her own country. Thus, they had to suffer though the weeks of his physical decline and death half a world apart.

The poetry challenge for August is to write a poem about a hero of yours—a hero whose lifetime overlaps (or overlapped) your own lifetime. Think about what, for you, constitute the characteristics of a hero. Your poem may be free or formal verse (if formal, please designate the form).

Due to formatting restrictions on the blog, all poems should be left justified. Unfortunately I am unable to publish indentations,shaped poems or even extra spaces between words or phrases.

Poems published in books or on the Internet (including Facebook and other on-line social networks) are not eligible. If your poem has been published in a periodical, please include publication data. Poems submitted after the August 15 deadline will not be considered.

The deadline is August 15. Copyright on poems is retained by their authors.

NOTE: An elementary school teacher submitted poems written in class for the July Poetry Challenge. The elementary school winner or winners will be posted soon. Teachers: This month’s challenge would be an excellent one for children or youth. If you wish your class to participate, give your students the challenge to write poems about their heroes. Send their poems to me by August 15. Be sure to include the name of the school, your name and the grade level and ages of the poets. Also, send only the first names of the children or youth, unless you send evidence that the parents have given permission for their last names to be published.