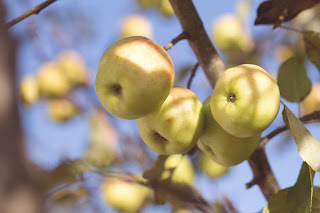 Photo by Tim Mossholder on Unsplash

The United Nations has declared 2021 as the International Year of Fruits and Vegetables so it is appropriate that our March challenge was for poems about fruits. Patrice Boyer Claeys. whose poem was used as an example this month, agree to serve as judge. For Second Place, she selected the following poem:

It’s January
boots in school hall.
I pull an apple
from my bag.

Here are the comments the judge made about “Golden Delicious”:  This is a poem of concision. But what it lacks in length, it makes up for in images that strike us with a simple beauty. In a matter of 20 short lines, we are taken through the four seasons of an apple tree. We see the winter apple brought out from the school bag, the spring tree obscured by blossoms, the hard green balls of August, and autumn’s first snow that frosts each gold orb. But it is the final image that quickens the heart. The abundant crop is shared with deer that stretch high like dancers / eat warm sun / buried deep within cold fruit. The poet’s reverence for the natural cycles of the earth comes across with lyrical grace in the yin and yang of the warm/cold dichotomy. The poem ends with a quiet peacefulness as the apple sustains life for the coming winter. This is a poem of gentle natural rhythms that slows us down and perhaps allows a moment of breath, space and appreciation.

When Our Guest Makes Breakfast

It’s not that I’m bored with toast and jam,
just that our guest has sliced a papaya
for breakfast this morning, and those red-orange slivers,
flushed and wet, lie curled on a plate
in the center of our table, offering themselves.

Just that I’m drawn to his hand on the knife,
the grace of his wrist as he peels and carves,
drawn to this blaze of mango, papaya—
and the speckled green kiwi
he tosses on top like a handful of coins.

Not that I yearned for a taste of the tropics
or favor pulp over toasted rye;
just that—this moment—I cannot resist
the cactus pear on the edge of the plate

that he’s pared and opened
and placed within reach of my fingers.

“When Our Guest Makes Breakfast” was published previously in Nimrod International Journal,  Spring/Summer 2013, Vol. 56, No. 2.

Comments by Claeys: This poem got me from the opening line, It’s not that I’m bored with toast and jam. This type of statement usually means exactly the opposite of what it says. It creates a tension from the very beginning, at the same time conveying a certain tone, in this case one of sly playfulness on the part of the narrator. As we read through the stanzas, the narrator reveals time and time again how attracted he or she is to the fruit described in luscious detail. The papaya slivers lie curled on a plate…offering themselves. And later, the cactus pear on the edge of the plate is opened / and placed within reach of my fingers. This is the language of temptation, and it is my take on this poem that the narrator desires more than the fruit. The mysterious guest slicing and plating these tropical beauties is revealed only through his hand on the knife / the grace of his wrist as he peels and carves. And yet, these details are as sensuous as the flushed and wet fruit itself. When a poet achieves two plains of action/ thought occurring together, we have a work of skill and interest that rewards on several levels.

Congratulations to Lori Levy and Jan Chronister! And thank you to Patrice Boyer Claeys for judging the contest, and to everyone who entered. If you entered but did not win, good luck in finding a home for your poem.

Jan Chronister is a retired writing instructor who has been inspired by the beauty and starkness of northern Wisconsin for over forty years. She has authored two full-length poetry collections and four chapbooks. www.janchronisterpoetry.wordpress.com

Patrice Boyer Claeys is the author of The Machinery of Grace (2020) and Lovely Daughter of the Shattering (2019). She collaborated with photographer Gail Goepfert on Honey from the Sun (2020), a book exploring the secret life of fruit. Recent work has appeared in Indolent Press, The Night Heron Barks, little somethings press, Burningword, Inflectionist Review, *82 Review and Relief: A Journal of Art and Faith. She was nominated for both Pushcart and Best of the Net prizes. Find her online at www.patriceboyerclaeys.com.

Lori Levy's poems have been published in Rattle, Poetry East, Confrontation, Mom Egg Review, Paterson Literary Review, and numerous other literary journals and anthologies in the U.S., the U.K., and Israel. She and her family live in Los Angeles. She enjoys her four grandchildren and is happy to have another one on the way.

Watch for another Poetry Challenge on April 1.