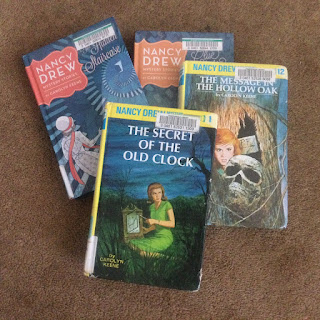 My mother was just a few days short of her thirteenth birthday when the first Nancy Drew mystery—The Secret of the Old Clock—was published in April 1930. Mother read as many of the series as she could get her hands on. After I had worked my way through the Bobbsey Twin books and The Five Little Peppers, and was reading The Little House on the Prairie, she introduced me to the favorite sleuth of her teen years. The series rapidly became done of my favorites, too.

The Nancy Drew books were all published under the pen name, Carolyn Keene, though several writers contributed to the series. In 1959, the Stratemeyer company began a project of revising the books for a new generation, including updating language usage and plots, removing racial stereotypes and, in some cases, condensing books. The series took on new life. Nancy Drew books have been translated to more that 45 languages, gaining fans around the world.

Under the covers,
a miracle happens,
not sleep, not the warmth of blankets,
nor mere unconsciousness,
night’s temporary paralysis,
but a book—
Nancy Drew, super-sleuth,
opening in a small hand
whose mate holds a flashlight.

After a day at school
when she got all A’s
but nobody asked—
mother’s had one drink too many,
and father is busy paying the bills—
there’s no one to tell
how full the moon looks
from her bedroom window,
or how sweetly a nightingale might sing
from a rooftop if this were England.

Huddled beneath the bedclothes,
she dives into a sea of strangeness,
finds a clue in a haunted house,
helps herself to cookies home-baked
by Hannah the housekeeper,
meets Bess, pleasingly plump,
and George, boyish as her name,
observes the occasional intrusions
of Ned Nickerson, the boyfriend.

Hearing a door slam
somewhere in the house,
she hunkers down further,
sniffing criminals and ghosts,
the scent of happiness
in a circle of light,
page after comforting page,
discovering the mystery
of the hidden staircase.

This poem, first published in Front Range Review, is from Jumping Off the Train by Donna Puccini (Windstorm Creative, 1997).

I like how mysteries and other fiction books provide another world for the reader, in this case, a child who needs an escape. This poem reminds me that I sometimes read with a flashlight hidden under my blankets! Maybe you did that, too.

Here is another take on the subject:

After Reading Too Many Mysteries

It’s a hard truth we learn from wild horses at Deception Point, where we found blood from the stone near the twisted root. On the Day of the Dead, we decide to solve the murder at the Pottawatomie Light, but have to deal with doctored evidence, hush money, road rage, birds of prey, the kiss of the bees, desert heat and even the girl with the dragon tattoo. We have much night work in a darker place. While other people sleep, we will listen to the silence; we shall not sleep. Children of the storm, we will follow the track of the cat, an endangered species. If the girl sleuth, whom we presumed innocent, is with child, we will face a firestorm; drive to the last precinct; learn if it was truly death in a tenured position and whether it was an acceptable loss. At dead midnight, we will enter locked rooms, turn seven dials, seek the secret of the old clock, check the arrangement of cards on the table. A flashback will give us total recall of all our yesterdays, including a cinnamon kiss, the falcon at the portal, and a dead madonna. We will develop a taste for death and leave with exit wounds.

This prose poem, which includes the titles of 50 mysteries (48 of which were on the shelves of a room in which I

The subject is broadened in this poem by Puccini:

We look at pictures of thinning bones.
The doctor uses words like
“Putting off the inevitable,”
“consult a specialist,”
“you’re doing all the right things.”

The doctor is kindly, and speaks the truth.
He respects the woman who disintegrates
before his very eyes, having seen
such things before. “Fractures.” “Pain.”
Substance becomes ash, the solid ephemeral.
He prefers the mystery of birth,
ponders his own children’s tiny limbs,
having embraced them this morning
before cereal and fruit.

I think of other mysteries:
web-footed men beckoning from hedgerows,
licorice allsorts coating the tongue black,
elves, trolls, deserted villages, déjà vu,
owls and banshees, dark wings flapping in a wood,
half-remembered nursery rhymes, galaxies,
a whistled piece of a tune, a lock with no key,
attic stairs, the missing ingredient in a pie,
lost umbrellas, misplaced sunglasses,
mice in the walls, black holes, a suitcase
that won’t open, the smell of smoke.

Puzzlement gathers itself for the final riddle.
Abracadabra does not work.
No spells, no charms.
A trail of breadcrumbs vanishes
like bone on a dexa-scan. Life is a little tune
played backwards. I must learn
to disappear
gracefully.

“Mysteries” was published in Journal of Medical Humanities and Ariel before appearing in Jumping Off the Train.

Kat Hutchinson’s poem, “The Anointing,” gives us another angle on mysteries:

We must've been twelve that summer,
launching into life with every dive
off the pier. You chose me with a whisper
and out we crept at midnight, silent,
risking dreaded phone calls home but
knowing the counselors had drunk
illicit beer and slept like the dead.

I can still hear the chirping cicadas, feel
leaves tickle my ankles as we followed
the path to the dock. A haze had settled
over the lake, the moon a woolen effigy
of itself casting an eerie glow. We
dipped our feet in the cool water.
Our legs touched, one spot of warm.

Did we talk at all before the moment
we heard soft splashes and saw, in the
distance, a white figure rising to beckon us?
You called her the Lady of the Lake
and said she had made us the Queens
of the Forest. We were not at all afraid.
We held hands in our invincibility.

Upon waking in the cabin, I was sure
it had been a dream. Or had I been
sleepwalking? You were nowhere
to be found. But then, as we loaded
onto buses for home, you saw me from
your window and winked, touching
your head where your crown had been.

Why is it in waning memory your name
has slipped away? Did the two of us
really go to the water's edge that night
and see the white-robed figure, believe
we were anointed as mythic beings?
Or were you just an inner part of me
emerging, sword drawn, in the darkness?

From A Matter of Dark Matter by Kate Hutchinson (Kelsay Books, 2022). It was first published in 3Elements Review (Fall 2019).

Poets published on this blog maintain copyright on their own poems.

The challenge for this month is a poem on the theme of mystery or mysteries. Your poem may be literal or metaphoric, serious or humorous. Think mystery books, mystery movies, scientific mysteries, historical or archaeological mysteries, etc. Your poem may be for children or for adults; if it is intended as a children's poem, please say that in your email. Note that the blog format does not accommodate shaped poems or long lines; if a poem has long lines, they are used, they have to be broken in two, with the second part indented (as in the poem “Lilith,” one of the May 2018 winners), or the post has to use small print. Note, too, that long poems are at a disadvantage. I am posting this challenge a day late, so the deadline will be September 16 instead of the 15th.

Poems could be disqualified if the guidelines are not followed.

1-Title your poem unless it is in a form that discourages titles.

3-Put your submission in this order:

Publication data if your poem was previously published

4-Please keep the poem on the left margin (standard 1” margin). Do not put any part of your submission on a colored background. No colored type or fancy font. Do not use a header or footer.

5-You may submit a published poem if you retain copyright, but please include publication data. This applies to poems published in books, journals, newspapers, or on the Internet. Poems already used on this blog are not eligible to win, but the poets may submit a different poem.

6-The deadline is September 16. Poems submitted after the deadline will not be considered. There is no charge to enter, so there are no monetary rewards. Winners are published on this blog.

7-Please don’t stray too from “family-friendly” language (some children and teens read this blog).

8- No simultaneous submissions, please. You should know by the end of the month whether or not your poem will be published.

9-The poet retains copyright on each poem. If a previously unpublished poem wins and is published elsewhere later, please give credit to this blog. I do not register copyright with the US copyright office, but by US law, the copyright belongs to the writer unless the writer assigns it to someone else.

10-Decision of the judge or judges is final.

11-If the same poet wins three months in a row (which has not happened thus far), he or she will be asked not to submit the following two months.

1-Send your poem to wildamorris4[at]gmail[dot]com (substitute the @ sign for “at” and a . for “dot”). The poem must respond in some way to the specific challenge for the month.

2-Put “September Poetry Challenge Submission” FOLLOWED BY YOUR NAME in the subject line of your email.

3-Submission of a poem gives permission for the poem to be posted on the blog if it is a winner, so be sure that you put your name exactly as you would like it to appear if you do win at the end of the poem.

4-Poems may be pasted into an email or sent as an attachment or both (Doc, Docx, rich text or plain text; no pdf files, please). Please do not indent the poem or center it on the page. It helps if you submit the poem in the format used on the blog (Title and poem left-justified; title in bold (not all capital letters); your name at the bottom of the poem).  Put everything in the order listed above.

6-Also, please do not use multiple spaces instead of punctuation in the middle of lines. I have no problem with poets using that technique (I sometimes do it myself). However, I have difficulty getting the blog to accept and maintain extra spaces.

Poems shorter than 40 lines are preferred.

Kate Hutchinson recently retired from a 34-year career of teaching high school English in Chicago's northwest suburbs. Her poetry and personal essays have appeared in dozens of publications and won numerous awards as well as three Pushcart Prize nominations. Her latest collection of poems, A Matter of Dark Matter, was released in 2022 by Kelsay Books. Kate is active with several local poetry organizations, including currently serving as president of Chicagoland Poets & Patrons and as assistant editor for the literary arts journal East on Central in Highland Park. To find more of her work and information about her new book, visit: https://poetkatehutchinson.wordpress.com/

Wilda Morris has just finished judging a poetry contest for a state poetry society and is co-editing a volume of poetry soon to be published by the Illinois State Poetry Society. Her second book of poetry, Pequod Poems: Gamming with Moby-Dick, was published by Kelsay Books in 2019.

Donna Pucciani, a Chicago-based writer, has published poetry worldwide in Shi Chao Poetry, Poetry Salzburg, ParisLitUp, Journal of Italian Translation, The Pedestal, Agenda, and other journals. Her latest book of poetry is Edges.