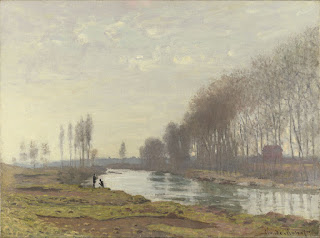 The Petit Bras of the Seine at Argenteuil by Claude Monet

I have cousins who live in a town along the Mississippi River, and poet friends who live in river towns. It seems to me that these rivers have had a big influence on their lives. There is a river running through Iowa City, where I grew up, but it did not (and does not) define the town in the same way. It has to compete for attention with the University of Iowa, writing and the arts, the fact that Iowa City is a huge medical center. Also, we lived on the other side of town—near the railroad tracks, but too far from the Iowa River for my sister and I to play along the banks. I think I rather envy those who have a river in their lives, so I picked “rivers” as the prompt for October.

The first example poem is a free verse poem by a Wisconsin poet. The poem is nostalgic, but also a bit philosophical. It is alive with details.

escape to the banks of the Natchaug.
Children settle, reading, splashing,
searching for where the crayfish hide.

I wade downstream, the shallows split
by a cluster of boulders, some craggy,
others worn flat by the rise and fall,

the sheer persistence of water.
Slipping on stones below the surface,
clutching at those above, I clamber

to the top of a rock, little pools
in its crevices still warm from the sun.
Stretched out on my back, I trail a hand

in cool water scissoring past,
problems of the day like a lump
in the stomach, rock-hard.

The sun slides below the treeline,
the only sounds now those of the river,
and the muskrat, slapping in and out

along the ledge.  The trees grow close
along the bank, their tops etch the path
of the winding water on an opaque sky.

I relinquish conscious thought,
lie like an offering on a salver
while the river works its slow magic,

“The Natchaug” was originally published on yourdailypoem.

The second example poem, written by a California poet, is a solo rengay. Rengay is a form created by Garry Gay in 1992. He had participated in the collaborate form of renga, but renga tends to be very long. Few publishers were interested in publishing it. Gay’s form has only six stanzas. The first, third, fourth and sixth are three-line haiku or senryu. The second and fifth stanzas have only two lines. Usually rengay is written by two or three poets taking turns supplying a stanza. Sometimes six poets collaborate, each providing one stanza. And sometimes, as in the following poem, one poet writes all six stanzas.

Rengay has caught on in the West, so much so that there is now a print in the U.S. dedicated to rengay: Tandem: The Rengay Journal (https://www.rengay.com/rengay-home). There will soon be an online rengay journal published in New Zealand,  Raining Rengay (https://rainingrengay.wordpress.com/?fbclid=IwAR1wPyTUvMbHfo7fCsA4xNBl4uEe4dAMFsxjDJO1jC3GqH4U-bs9t1XAsQo). You can read more about rengay at https://www.rengay.com/rengay-home.

This rengay has a lot of clear images—with a title that is abstract and calls the reader to ponder the ways in which life is like a river.

a river
braids through salt marsh
streaks of dawn

a pair of snow geese
flapping up in tandem

evening fog settles
the river trickles down
to the sea

Other River Poems:
For links to other well-regarded river poems, see https://poets.org/anthology/river-poems.

The challenge for this month is a poem on the theme of rivers (or a particular river). Your poem may be literal or metaphoric, serious or humorous. It can be for children or for adults. Note that the blog format does not accommodate shaped poems or long lines; if a poem has long lines, they are used, they have to be broken in two, with the second part indented (as in the poem “Lilith,” one of the May 2018 winners), or the post has to use small print. Note, too, that long poems are at a disadvantage.

Poems could be disqualified if the guidelines are not followed. Submit your poem by October 15.

1-Title your poem unless it is in a form that discourages titles.

3-Put your submission in this order:

Publication data if your poem was previously published

4-Please keep the poem on the left margin (standard 1” margin). Do not put any part of your submission on a colored background. No colored type. Do not use a fancy font and do not use a header or footer.

5-You may submit a published poem if you retain copyright, but please include publication data. This applies to poems published in books, journals, newspapers, or on the Internet. Poems already used on this blog are not eligible to win, but the poets may submit a different poem.

6-The deadline is midnight, Central Time Zone, October 15. Poems submitted after the deadline will not be considered. There is no charge to enter, so there are no monetary rewards. Winners are published on this blog.

7-Please don’t stray too from “family-friendly” language (some children and teens read this blog).

8- No simultaneous submissions, please. You should know by the end of the month whether or not your poem will be published.

9-The poet retains copyright on each poem. If a previously unpublished poem wins and is published elsewhere later, please give credit to this blog. I do not register copyright with the US copyright office, but by US law, the copyright belongs to the writer unless the writer assigns it to someone else.

10-Decision of the judge or judges is final.

11-If the same poet wins three months in a row (which has not happened thus far), he or she will be asked not to submit the following two months.

1-Send your poem to wildamorris4[at]gmail[dot]com (substitute the @ sign for “at” and a . for “dot”). The poem must respond in some way to the specific challenge for the month.

2-Put “October Poetry Challenge Submission” FOLLOWED BY YOUR NAME in the subject line of your email.

3-Submission of a poem gives permission for the poem to be posted on the blog if it is a winner, so be sure that you put your name exactly as you would like it to appear if you do win at the end of the poem.

4-Poems may be pasted into an email or sent as an attachment or both (Doc, Docx, rich text or plain text; no pdf files, please). Please do not indent the poem or center it on the page. It helps if you submit the poem in the format used on the blog (Title and poem left-justified; title in bold (not all capital letters); your name at the bottom of the poem).  Put everything in the order listed above.

6-Also, please do not use multiple spaces instead of punctuation in the middle of lines. I have no problem with poets using that technique (I sometimes do it myself). However, I have difficulty getting the blog to accept and maintain extra spaces.

Poems shorter than 40 lines are preferred.

Ten years now a widow, Marcyn Del Clements is grateful both her daughters are living fulfilling lives on their own.  She rattles around in a big house, tending some fifty koi and goldfish in her swimming pool converted to a swimming pond.  Since Marcy never conquered iambic pentameter, she found happiness writing Japanese short forms.  Overjoyed lately, when she discovered Haibun and Tanka Tales, she thinks she’s found her métier.

Kay N. Sanders, a native Southerner who married a Connecticut Yankee, has made her home in Oshkosh, WI for the past 55 years. She enjoys the seasonal changes in her big backyard and the 11-circuit labyrinth mowed into the grass--all inspiration for her many poems, stories, and memoir pieces.

Poets retain copyright for their own poems.